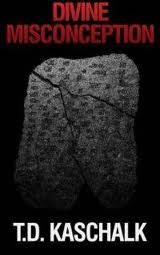 Of all the books I have reviewed this year, Divine Misconception comes out on top so far for something I call “Ken’s Biggest Book Meltdown Award.” The award is for a book that starts out strong, well-written, promising, interesting and headed for a rave review – then falters, derails, goes off track and crashes, burns and disintegrates into a catastrophic fictional fireball.

While I was reading the first five chapters of Divine Misconceptions, I was thinking things like: “This is great!” “Wonderful strong character!” “I’m in love with the protagonist!” “This is a wonderful story!” “Well-paced!” “So vivid and real!” “I wonder what is going to happen next!”

But then, Chapter Six and – KA-BLAM! – it takes an agonizing, crunching literary wrong turn, goes careening into a ditch, never to be towed back out again.

The central premise of the book is based on theories of the late writer Zecharia Sitchin, who published a number of popular books proposing that the origin of the human race was engineered by a race of ancient aliens called the Anunnaki. They came from a planet called Nibiru, and landed in ancient Sumer thousands of years ago. Sitchin contends that the Anunnaki biologically constructed the human race to work for them as slaves, but later freed them to go their own way – and thus the origin of all of us today! This is not fiction, mind you, but what Sitchin proposes as fact.

In the tradition of ancient astronaut theorist Erich von Däniken, Sitchin’s books found a wide audience and continue to sell extremely well. Author T.B KASCHALK credits Sitchin as her inspiration in the dedication of this book.

Hey, I’m all in favor of fringe theories. I’ve read and enjoyed Sitchin, von Däniken and others who have proposed ancient astronaut scenarios. It’s also a terrific idea for a book of fiction. The problem here is in the execution. In Chapter Six – ground-zero of the meltdown – Kaschalk introduces a new character, who proceeds to spend the entire chapter lecturing our hero – the sweet Native American school teacher Lisa Jenkins – on the ancient astronaut theory. Even Lisa herself is struggling not to fall asleep in the backseat of the car as he drones on and raves about the Anunnaki!

Then the downhill slide of the narrative really gains steam. The last six chapters are action-packed to be sure, but involves absurdity piled on top of absurdity. All sense of fictional plausibility completely flees the page. There is one ludicrous, absolutely ludicrous, situation after another. And I mean – really ridiculous – and not because of the fringy premise of the book – but because of the 100% unbelievable way the events are handled in their detail.

(The Vatican Secret Service employing a few Joe Six Pack blue-collar construction workers to find the only object on Earth that can save the entire planet from destruction? Come on! And with three days until the end of the world – they still dutifully take their lunch breaks? Yow!!!)

We all know that when reading science fiction/fantasy the reader agrees to “willingly suspend disbelief” so that he or she can enjoy the story. But there is a limit to what we can or should expect the reader to accept. Even when the tale is strange – it still must at least have that sense or aura of plausibility – and, I’m sorry, but this yarn has none.

I end with a heartfelt plea to the author: Please, please, please write another book bringing back this extraordinarily wonderful, real, vivid, highly sympathetic character, single-mom and small-town school teacher Lisa Jenkins! She’s wonderful! I fell in love with her! I’m serious! Put her into a new situation – it can even have a paranormal aspect – but make it much milder, more subtle and more grounded in reality and more plausible – perhaps a strange situation that maybe only haunts the background of Lisa’s life. You’ve really got something here! You’re a greater writer! Now go the extra mile! 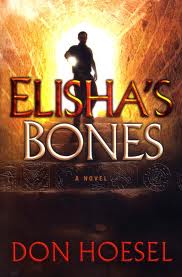