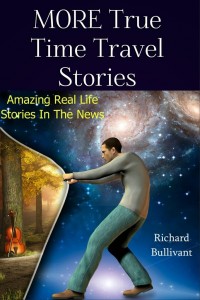 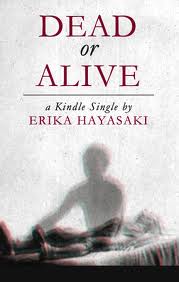 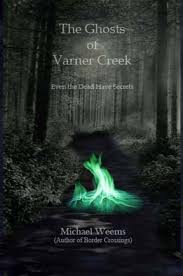 Solomon Mayfield is 87 years old and running out the time clock on his life in a Texas small-town nursing home. Maybe it’s not surprising for a man so near the end of his life to see the occasional ghost come drifting through his room to float eerily over his bed. But for old Mr. Mayfield, seeing ghosts has been a regular occurrence since he was 12 years old.
The circumstances surrounding what triggered this special ability are at the heart of the plot of THE GHOSTS OF VARNER CREEK

This is a first novel for MICHAEL WEEMS, but he writes like a novelist with far more experience. His writing demonstrates the understanding that the best fiction is based on character. Yes, a truly great book needs more – plot, background, premise, conflict – all that stuff. But if you are able to create vivid characters and make the reader care about them, you’re more than halfway home to a great read.

Mr. Weems manages that and more. He wrangles all the elements of long-form fiction together sufficiently here to make for a fine novel.

So as the title implies, The Ghosts of Varner Creek has the restless undead as a central premise, but this is a very different kind of ghost story. It involves events that happened in a turn-of-the-century southern Texas, cotton-farming village that is still a few years off from getting electricity or them new-fangled “horseless carriages.”

Young Solomon’s father, Abram Mayfield, is a no good, violent drunk who only married Solomon’s mother, Annie, after he practically raped and impregnated her. Their subsequent life, as you can imagine, is not exactly one of marital bliss. To add heartache and pain to the whole situation, Abram and Annie’s first child is afflicted with Down Syndrome. Against this background, Solomon, a year younger than his mentally challenged sister, is doing the best he can to get along in a family that is isolated and dysfunctional, to say the least.

But how did all this ghost business get started? That’s what you have to read the book to find out — and few will be disappointed at the skillful way Weems cobbles, crafts and weaves together a story that is dark and gut-wrenching, but ultimately uplifting and hopeful.

This book has been recently available free as a Kindle selection, but as of this review, it is being offered for 99 cents – more than a fair price for a terrific read.

Join Ken For His Adventures In:THE STRANGE UNIVERSE OF DR. 58 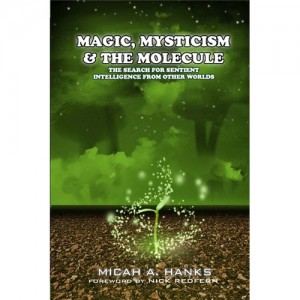 In a strange, perhaps slightly counterintuitive sense, Micah Hanks is like the Carl Sagan of paranormal investigation. With this book, Magic, Mysticism and the Molecule, Hanks emerges as a keen observer and explainer of science on the edge, the occult, esoteric thought – everything that mainstream researchers consider to be “the fringe” of scientific investigation and philosophy.

Sagan was an accomplished astronomer in his own right, but by far his biggest contribution to science was in bringing the wonders of the universe to the masses in a way that was erudite, yet entertaining and awe inspiring. Likewise, Hanks has been in the trenches, so to speak, personally conducting paranormal investigations, but with this book, he shows the potential to be the “go to guy” to bring a broader understanding of paranormal phenomenon to the greater public.

In Magic, Mysticism and the Molecule, Hanks takes us from ancient times, through the Middle Ages and right on up to the present day, showing how paranormal experiences and phenomenon have been consistent and confounding across the centuries. It’s all in here — ghosts, demons, hauntings, angels, aliens, UFOs, mystical experience, meditation, psychedelic drug induced shamanism, studies of weird brain effects by drugs and EM (electromagnetism) – and we are shown clear and intriguing connections between all of it.

Certainly, Hanks flirts with writing a book that is highly derivative because he relies heavily on the works of some of the biggest names of the cutting edge – Terrence McKenna, Rick Strassman, John Keel and many others. Too many books on paranormal topics these days are basically rehashing all the ideas which have already long been out there. But in this case, it’s more like the author has chosen to stand on the shoulders of giants to that he can see further. Also, to be fair, this book is not entirely derivative because Hanks does include information from personal interviews he conducted, and he also relates some of his own real life experiences if when they help illuminate his topics.

I also like the way the book is conceived as referenced by its title. It welds together — “magic,” (rituals and archaic practices) “mysticism” (transcendent religious thought and practice) and “molecules” (hard science of transcendent brain perceptions and function) — in a way that delivers a fresh, overall perspective, enabling us to see a grander “whole” or process at work behind it all.

Also, on every page there is a vital “Just what the hell is really happening here!” kind of feeling. There’s a dogged almost urgent drive at getting to the bottom of the most confounding mysteries that keep popping up in all cultures across all times — no matter what the hardened, accepted official dogma of the day is telling us about what is supposed to be true and not true.

So this book scores a high recommendation from me … and I’ll be expecting great things from Mr. Hanks in the future.