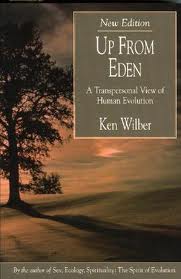 If you think about it, there must have been a time when human beings did not have the same kind of minds or “brand” of consciousness that we have today.

For example, imagine what it would be like to have no personal ego identification. Can you? Imagine being a human creature that was more akin to one of the “lower” animals, such as being a member of a herd. Rather than framing your reality in terms of “I” or “me” – you only identify yourself as a member of a group – but not even “a” member. You are the group.

This is just one theoretical past element of the human condition KEN WILBER explores in this amazing book, UP FROM EDEN: A TRANSPERSONAL VIEW OF EVOLUTION. Most people are comfortable with the idea that we have evolved biologically as a species, but what fewer people contemplate is that the physical body is not the only element of humanity that must have evolved.

Throughout the uncounted millennia – the human mind must have undergone enormous transformation as well.

At its earliest stage, Wilber calls the psychological make-up of the human mind the pleromatic-uroboric — an era when “people” were primates gathering and scavenging to survive with all the other animals. This is a state in which the individual hominid cannot distinguish the difference between his or her inner experience from outer reality. In a sense, “people” are embedded in a kind of unconsciousness. They function like animals, concerned with finding something to eat, staying warm, having sex – just getting along and surviving.

Somehow, Wilber suggests that the mind advanced out of this stage over eons of time – the mind transcends– to the next stage of development, which he calls the typhonic. This is an amazing advancement, since the individual now is able to see himself or herself as a separate from the rest of nature. The individual is able to think: “This is me, that is not me.”

But this is still a long way from people having the sharp distinction of being a “special” individual with a unique identity. It’s more like a blurred stage that might be dreamlike. The individual is moving along in an exterior world, distinct from it, yet partially absorbed in it as well. There is still no true language.

And so the march of human evolution continues: The next stage is the “mythic membership,” which is eventually transcended to achieve the ego stage. Finally, a man or woman can stand up and say: “I am me!”

Note that Wilber suggests there might have been variations within each stage, such as a ‘lower ego’ stage in which a sense of individuality has emerged, but is still heavily tied to the group. Other scholars, such as Julian Jaynes, have offered similar scenarios. Jaynes, for example, suggested that even the ancient Greeks still had not achieved the full state of ego consciousness we have today. He famously pointed out that even the characters of the Iliad seem to act more like “pawns being pushed around a chessboard” than men acting with individual initiative. The proposition is that these Greeks were at a lower stage of ego development, acting more like members of a hive or herd than people with a sense of sharp self-identity — but almost there.

Wilber makes the case that humanity has been on a hundreds-of-thousands-of-years journey of evolving “upward” from a lowly unconsciousness state to higher forms of self-knowledge and awareness– and naturally we can’t conclude that we are at the journey’s end.

Just as we transcended – and absorbed and incorporated all the lower stages – we are now struggling to get beyond our ego-based consciousness toward further transcendence.

Up From Eden will be one of the most remarkable and challenging books you have ever read, if you dare to tackle it and are open enough to accept what it implies about the nature of humanity – which is both painful and hopeful in the extreme.

Come along with Ken Korczak to THE STRANGE UNIVERSE OF DR. 58