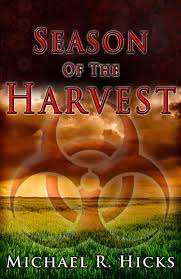 You know, this is a fast-paced science fiction yarn that will keep you turning the pages, and you may even enjoy yourself. However, anyone writing an honest review should point out a number of aspects of this book that must be recognized for what they are: a lot of standard cliché characters, cliché subplots, cliché backgrounds, etc.

The hero of Season of the Harvest? Why, by golly, he’s a tough FBI agent, a former Afghan war vet who has — yes — a dead wife! Wow! He’s also devilishly handsome, square-jawed and a silent loner. I mean, why create a new, unique interesting character when you can just go grab one off the shelf from the Cliché Store?

How about the female lead character in this book? Well, she can be found in Aisle 9 of the Cliché Store next to the baked beans. She’s a brilliant, genius scientist, who happens to be unbelievable gorgeous, totally pure of heart — and just so plain hot, hot, hot!

Don’t believe me? Try: Tara Reid as Aline Cedrac in Alone in the Dark (2005), Robin Riker as Marisa Kendall in Alligator (1980) and Saffron Burrows as Dr. Susan McCallister in Deep Blue Sea (1999). (I could go on at length).

You can bet your bippy that our super sexy science kitten will have an INSTANT ATTRACTION to the hard-as-nails, grieving ex-Special Ops military tough guy who could never love again … TILL NOW!

As for some of the backdrop, there’s a mega-high-tech underground fortified lab complete with concrete doors and scads of big screen computer equipment — and there’s even a few other major clichés thrown in for good measure.

How about this one: An important character is tragically shot in the chest by a nefarious traitor among the band of plucky heroes fighting to save humanity — only to turn up ALIVE! later because she was conveniently wearing a BULLET PROOF VEST! HA! HA! Didn’t see that coming!

I think in the last 3 or 4 Dean Koontz books I have read, Koontz dragged out the old bullet proof vest thingy 3 or 4 times. Perhaps Hicks and Koontz both have frequent buyer’s cards at the same Cliché Store.

But, whatever. I know that many people will enjoy this potboiler — and yes, even I will say I found this book a pleasant enough read. Go ahead and plunk down your mad money for a book. I did. I enjoyed it well enough.