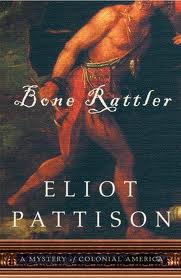 This work of historical fiction by Elliot Pattison is one of considerable complexity. It builds a plot by first introducing the reader to a dizzying array of names and characters, situations, subplots and situations. But it expertly couches it all in a highly realistic, gritty late 1700s world where the average person experiences immense hardships and cruelty on a daily basis – something those of us today would find hard to imagine.

The protagonist is a hard-luck Scot made a criminal and prisoner on flimsy evidence by the evil, greedy British of the colonial era – he is imprisoned aboard a convict ship heading for the New World where he faces a life of indentured slavery in a plantation, except by luck of his background – training as a physician – and a mysterious murder aboard the ship – thrusts him into the role of a Sherlock Holmes kind of guy.

Our hero Duncan McCallum faces hardships aplenty. He is confronted with mind-bending mysteries to solve as the plot plays out against a background of life aboard a miserable ship, and then in the wild, harsh and dangerous American colonies.

The complexity of the plot makes it obvious that Mr. Pattison is an extremely skilled writer capable of creating vivid characters we care about. He makes the reader feel what it might actually have been like to live and struggle in this dangerous, but exciting era, when the desperate and adventurous alike strove to carve out a new life in a New World.

For me, the flow of the story is too often slowed down by some rather tedious and mind-numbing dialog, and a sort of overly rigorous attention to minute detail which I found frustrating – and at times – the characters act in ways that seem purely illogical — yet I would eagerly recommend this high quality piece of literature to anyone, especially those with an interest in the British colonial era of the Americas.