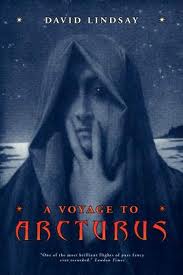 Scottish novelist David Lindsay died a desperately unhappy man on the edge of poverty. He wrote perhaps the greatest underground novel of the 20th Century. He was the biggest literary influence of J.R.R. Tolkien. He was vastly admired by the literary intelligencia of Britain and Europe, including C.S. Lewis.

But Lindsay’s uncanny masterpiece– A Voyage to Arcturus – sold less than 500 copies, marking him as a bad-risk pariah among publishers, and sentencing him to a life of obscurity and frustration.

Today A Voyage to Arcturus still doesn’t generate a dime because anyone can download it for free from the Internet. Yet, this book has been named to any number of the “The 100 Novels You Must Read” lists. It’s a work of singular genius. Imagine “Lord of the Rings” meets “Ulysses” or perhaps the “Odyssey” meets “Autobiography of a Yogi.” Reading it is like taking peyote while sitting in Zen meditation.

The book involves the journey of a man by the name of Maskull (mask-shell?) who attends a typical early 20th Century-style séance which turns out to be not so typical. At the séance he meets two mysterious men, Krag and Nightspore, who invite him on a journey to another planet in a far-away star system. The planet is Tormance which orbits the star Arcturus. On Tormance, Maskull embarks on a dream-like journey through the deep reaches and layers his own psyche, but also through the fundamental nature of reality and consciousness.

Sounds pretty deep, doesn’t it? And so it is. This is not an easy read; it’s never predictable, but unlike, say, Finnegan’s Wake, it’s not just a mish-mash of super avante garde literary esoterica. A Voyage to Arcturus has a logical structure leveraging a transcendental narrative that both makes sense and keeps you rocked off base at the same time. This is not a book designed to make you comfortable while it transports you through a sense of wonderment. It’s not airy-fairy, New Agey feel good fair – it’s better than that!

This is a masterpiece that will jolt you off your comfort zone. It will force you to look inside yourself for a frank inspection of what you might not want to see, but maybe what you should see.

No wonder it sold less than 500 copies – yet amazingly has been read by tens of thousands since.

Ken Korczak is the author of: THE FAIRY REDEMPTION OF JUBAL CRANCH
Tweet