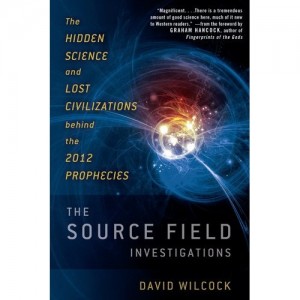 I love books which espouse alternative views. As the great science fiction writer Philip K Dick said: “Sometimes the best place the look for the truth is in the trash.” But that doesn’t mean everything in the dumpster is good to eat. The discriminating reader must separate a still fresh, half-eaten ham sandwich from a rotted apple.

But this book is jam-packed with obviously false facts. At the very least, Wilcock could not be bothered – or did not want to be bothered – to take just a few minutes to find alternative explanations for his many amazing claims. Let’s me just take a random selection from the enormous load of “evidence” Wilcock’s serves up in THE SOURCE FIELD INVESTIGATIONS to bolster his theory of a coming “Golden Age of 2012”:

FALSE: The Boskop skull is evidence of a former advanced race in South Africa

Wilcock goes on page after page extolling the evidence that a large skull that could hold 25% more brain capacity than modern humans was found in South Africa. He bases his claim on a book co-authored by a psychiatrist and cognitive scientists Gary Lynch and Richard Granger. And they do make the claim that a possible large-brain skull was found, and they also speculate that the face of the skull would have had a small, child-like face with small nose and mouth – in short, alien like.

However, Wilcock could have taken 10 minutes to Google the truth behind Lynch and Granger’s claims, he would have found they are patently off-base and speculative at best, and no other scientists agree with them. Lynch nor Granger are not paleontologists or archaeologists, and they badly erred when assuming the Boskop skull was in any way unusual. In fact, they only had a few small fragments of a skull, and extrapolated a large brain from them. But even if they were correct about the brain size, it means nothing.

To get the full story of why Wilcock is wrong about the Boskop skulls read the views of anthropologists and paleontologist John Hawks here:John Hawks

But what’s even more bizarre here about Wilcock’s claim is that earlier in the book, he made a lot of hay about how brain size does not matter! He gives several examples of people with damaged or surgically removed parts of their brains who maintain normal intelligence. So when it suits Wilcock to extoll the wonders of large brain size, he does so. And when it suits him to extoll the wonders of small brain size – he goes ahead and does that too.

FALSE: Wilcock says Astronomers were shocked and “embarrassed” to discover a gigantic loss of heavy elements, including oxygen, on Jupiter between 1979 and 1995.

This is absolutely ridiculous.

To make this claim, Wilcock sites information by French astronomer Tristan Guillot, but what Wilcock decides to leave out is extraordinary. First, Jupiter is 99% composed of the light gases hydrogen and helium. When you combine all of the heavier elements together, you get less than 1% of the total mass of Jupiter. The amount of oxygen on Jupiter is extremely tiny, and plays no significant role in the structure of Jupiter. Source

But what’s worse, Wilcock does not seem to know this: The exact composition of Jupiter was poorly understood between 1979 and 1995 – and the reason is simple. That was before actual space probes reached Jupiter and physically sampled its atmosphere! Before the Galileo mission reached the Jupiter system in 1995, the fine details of what was inside Jupiter were not well known. For Wilcock to quote data from 1979 to 1995 – and then conveniently leave out all the best, later information gathered by actual probes – is sensationally ridiculous.

Anyone who wants to spend five minutes on Google can easily see this claim is 100% untrue. I mean, just go right to the experts, the USGS, the United States Geological Survey. They say: “Although it may seem that we are having more earthquakes, earthquakes of magnitude 7.0 or greater have remained fairly constant.” Earthquake facts

What about that, David Wilcock? Well, he says they are not counting the 7.0 or above and only count the minor earthquakes. I invite anyone to check out the link and decide who they choose to believe.

Even where I find some of Wilcock’s information fairly intriguing and compelling, one can easily find alternative explanations. Take the example of the persistent motif of the pinecone throughout religious symbolism, from the ancient Babylonians, to the Vatican to the present day. Wilcock says the pinecone is a symbol of the pineal gland in the brain, and the ancients understood that this was the “Third Eye” the cosmic doorway to higher consciousness.

That’s possible, I suppose, but if one is intent on writing an honest book that is also thorough, one must at least offer alternative explanations for all the pinecone art if they are available – and they are.

Wilcock points out, for example, that the ancient Roman god Bacchus of wine and drunkenness carries a staff with a pinecone at the tip. My friends, I’ll give you one guess as to what one of the primary components of wine making was back then. You guessed it: pine resin! Is that why Bacchus wields the pincone staff? What do you think?

What about the ancient Mesopotamians? Why did they favor the pinecone so much in their depictions of kings and gods? Well, fertility rites and fertility goddesses were a really big deal back then, and a pinecone is certainly an excellent symbol of regrowth and regeneration. But there’s more: Pine and cedar tree were an extremely important economic commodity back then. For example, the ancient Phoenicians grew rich on their trade of timber – cedar and other pines- so naturally a pinecone might be grasped as an important symbol of wealth and fertility. Go take a look at the flag of modern-day Lebanon. It depicts a cedar tree because of the deep importance and history of this kind of pine tree in the ancient Mideast. The cedar is referenced many times in the Bible as a symbol of growth and strength. Could that be the true meaning behind all the pinecones?

At the very least, it’s a valid alternative explanation – but Wilcock is not interested in anything that does not support his pet theories.

I could go on – but I think you get the picture. This book, and the many false claims of Wilcock over the years (remember his statement that world governments would disclose secret UFO information in November of 2009?) remind me of that old saying: “Even a broken clock is right twice a day.”

Well, Wilcock is not just a broken clock – he is seriously cracked.

5 thoughts on “David Wilcock is a Cracked Clock: Source Field Investigations Is a Feast of False Facts”