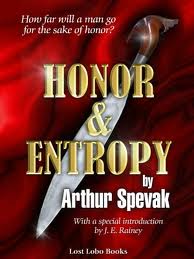 His best friend Telly Brensen is tall and handsome as a Nordic god. His spirit is fiery and bold. Women would sell a kidney for a single night with him. He’s intelligent, fearless and there’s no challenge in the world he can’t grapple with, conquer and wrestle to the ground.

Art and Telly endure a lackluster, if not dreary middle class upbringing in the American northwest, and then get flung out into the world. They confront the brutality of war, tragedy, beautiful women, boredom, sleazy criminals, greedy and incompetent bosses, snarky coworkers, strange lands, exotic cultures and confounding philosophical dilemmas.

Does it sound like the making of the proverbial Great American Novel? It does. And this novel, HONOR AND ENTROPY comes close to just that – a Great American Novel. For me it is a no brainer to give this my top recommendation. But now let me make a few points:

The great writer and poet Randall Jarrell said: “A novel is a long piece of writing that has something wrong with it.” HONOR AND ENTROPY is a superb novel, but it carries Jarrell’s stigma.

Could this novel have been made better by editing out at least 200 words? That’s beyond a reasonable doubt. I’d take out 300. I know, I know, it hurts! Taking a razor to prose someone sweated blood over is agony! But in the battlefield of literature, you have to accept the harsh reality that sometimes a leg must be sawed off to save the patient.

Also, this novel challenges with tricky-to-follow flash-backs, and abrupt changes in perspective of who is thinking what, when and where. Plus there are more than a dozen characters to keep track of, and this will keep even astute readers on their toes.

But look — the best literature requires those confronting it to give something in order to receive. A book that challenges the reader is a book that delivers the most impact.

When I got into the rhythm of the flow of the narrative, the shifts and flashbacks started to feel like a finely woven pattern; I felt absorbed in the vivid world the storyline creates; I was treated to vibrant, real, believable and tragic characters I found myself caring about.

Please note that this book is not as difficult as, say, “Ulysses” by James Joyce, or maybe “Gravity’s Rainbow” by Thomas Pynchon. It’s even less “gonzo” than “Catch-22.” All of these 1,000 pages flow along well enough, but expect a certain learning curve for the first 100 pages, or so.

What’s interesting about HONOR AND ENTROPY is that it’s a work of vivid American realism – yet at the same time – manages to incorporate deeper levels of allegory, while also shadowing timeless classics, especially Homer’s Odyssey and Shakespeare’s Hamlet. More than anything, the characters are on a hero’s journey, or in the case of Art Spevak, a vision quest.

If I could grant three wishes to this book, they would be: 1. A second more aggressively edited edition is released, 2. That Hollywood comes calling to make it into a movie, and 3. It finds a gigantic audience.