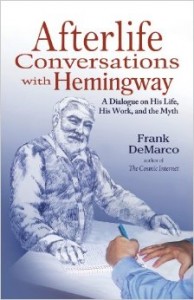 This is the second FRANK DeMARCO book I’ve read. The first was “A Place To Stand,” and I think anyone who reads both of the above will be sufficiently impressed that here is a guy who not merely another frivolous New Age writer raving from the fringe, or some person seeking to capitalize on the name of Hemingway merely to sell a book.

This is an intelligent book of substance that should intrigue long-time Hemingway fans, and give us pause to consider the implications of what it might really be like to have a one-on-one chat with an American literary giant.

There is ample historic president for these kinds of books, in particular, Jane Robert’s (author of Seth Speaks), “channeling” of the American philosopher William James. That book came out in 1977; James died in 1910.

Another famous example: Emily Grant Hutchings and a medium using an Ouija board took “dictation” from the spirit of Mark Twain to produce an entirely new novel, “Jap Herron.” It was published in 1916, six years after Twain’s death.

In 1869, a medium “downloaded” a fresh novel written by the deceased Emily Brontë; It’s presented in a book called “Strange Visitors” edited by an esteemed legal scholar, Henry J. Horn.

So DeMarco is backed by solid tradition, and the precedent of others who have written amazingly high quality books in this way.

Beginning in 2004, DeMarco, using the time-honored, method of automatic writing, made psychic contact Hemingway and engaged in a vigorous post-death conversation with Hemingway. The dialogue resulted in this book.

In it, Hemingway clears the deck on dozens of misconceptions he says numerous biographers and academics have besmirched upon his life, work and legacy over the years.

Not that he’s particularly angry or blames living biographers who, after all, only gave it their best shot. It’s just that, Hemingway says the game is rigged. Writing a truly accurate biography is fundamentally impossible. The deceased author tells DeMarco:

“To write a true biography you would need to do impossible things, such as:

* See and feel and think and react as the subject would have done.

* Contain within yourself all the subject’s background, including people, places, books he’s read, the news of the day (day by day), the daydream he had, the talents and aversions and every aspect of his personality.

* Know everything that had ever happened to him and some that happened only around him, and from multiple points of view.

* Know every strand that operated within him, and in what proportion and in what circumstances, including the tremendous amount he didn’t realize himself.

*Know at least something of why he came into life (or, you might say, what the potential or that particular mixture of elements was) and see how one thing could express only at the expense of others, and hence what tensions set up.”

That all makes sense, when you think about it. Certainly, the dead Hemingway has a knack for bringing an unclouded, common-sense kind of wisdom to vexing questions and thorny issues.

Another example: DeMarco asks Hemingway to explain something controversial the macho-man writer once said, that he would “rather beat someone up than read a good book.” (This in light of Hemingway’s well-known love of boxing and barroom brawling).

Hemingway, from his perch in the Afterlife, defends his statement this way:

“All right … who are you talking to? In this case I mean, what age Hemingway? The answer you’d get from a 20-year-old isn’t what you’d get ten years later, or thirty, or after-the-fact entirely … the whole point of living is not to be the same year by year, but to change — I didn’t prefer beating somebody up to reading a good book. Just count the number of people I beat up and the number of books I read!”

DeMarco’s book is loaded with gems like these. Hemingway’s quips zero in like sharpened darts, hitting dead-on rhetorical bullseyes time and again.

If this is not the actual spirit of Hemingway speaking through DeMarco, then DeMarco himself is one clever wordsmith.

But wait a minute — DeMarco cautions us that just who is actually communicating here is a tad more complicated than you might think. Here is the way DeMarco struggles to define his trans-death connection with the deceased writer:

“I think you mean to say that Hemingway 1899-1961 and DeMarco 1946-20-whatever do not touch, and that I have been thinking that DeMarco-46 was touching the spirit of Hemingway-99, but it may be more accurate to say that the larger being of which DeMarco-46 is a part is communicating with the larger being of which Hemingway-99 is a part, and the two time-bound parts are having a sort of virtual conversation.”

In other words, most people assume that when you contact the spirit of a dead person, you are speaking to the exact person/ego-construct/personality of that same person when he or she was alive. 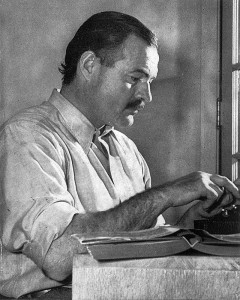 But there is not a Person A = Person A situation vis-a-vis the live version of a person and the afterlife version of that same person.

After we pass over to the other side, we apparently expand our consciousnesses to embody the “whole self,” or perhaps “soul self.” We become aligned with the so-called Oversoul.

For the dead, the ego-self recedes into the background because the ego is actually an elaborate, artificial coping/defense construct designed to function in the environment of our earth-bound, physical matter reality. The ego is too often shaped by fears and desires, and is a reactor rather than an actor within a material system. Yet, after death, we can still operate from an ego-based platform if we want to …

What I really like about Afterdeath Conversations With Hemingway is that it reads not like the typical spooky and/or smarmy medium-channeled stuff, but as an insightful, intelligent and piercing series of observations by a savvy writer, who just happens to be positioned in the non-physical realm.

DeMarco’s book makes the extraordinary situation of speaking with the dead seem as commonplace as chatting with your Uncle Ned via Skype.

With dogged attention to detail, DeMarco combs through the issues that were the passions of Hemingway’s vigorous life — World War I, the Spanish Civil War, the American psyche, the artistic culture of Europe, big game hunting, deep sea fishing, writing and literature. Hemingway discusses what it meant to be an American, an emerging modern man in a nation straining to become the next superpower.

What about his suicide? Hemingway is actually rather blasé and dismissive of the whole issue. He called suicide “the family exit.” Hemingway’s father committed suicide, as did his brother, Leicester, and sister, Ursula. The dead Hemingway says of his suicide:

“When I left the body — when I blew myself out of that situation — I knew what I was doing, and why. I wasn’t emotionally distraught, I wasn’t out of my mind, and I wasn’t even depressed — once I figured out how to get out … the bad effects of suicide have a lot more to do with attitudes that with the given act.”

After his death, Hemingway tells DeMarco that he now manifests himself in the spirit world as a 30-something-year-old.

“I went back to being in my mid-thirties,” Hemingway said. “I was happy then. I’d taken my lumps and I’d already left Hadley, (first wife Hadley Richardson) which was a stupid thing to do but there you are, and I was in the prime of life.”

The bottom line: This is a marvelous read, well worthy of five stars, and gets my top recommendation.

One thought on “The Ghost of Ernest Hemingway: Still Eloquent in the Afterlife”