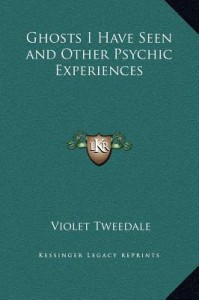 Ghost hunting clubs and paranormal investigation has become a mega-popular trend in the past decade. Local folks everywhere are starting up clubs and teams, dedicated to seeking out proof that the dead still live on another plane.

The first order of business for these types is printing up some cool t-shirts with neato logo. Then some cool hats with logo. Oh, and you have to have a web site and a Facebook fan page. Also required is the latest electronic gear: full-spectrum cameras, shadow detection devices, gizmos that show changes in local magnetic fields, detectors that can ferret out anomalous cold spots, subhuman-frequency audio recorders…

Yes, what is old is new again. Today’s paranormal investigation teams would do well to get this free ebook copy of Violet Tweedale’s, GHOSTS I HAVE SEEN. (Just click on the link to download free copy).

Tweedale is the late 19th Century and early 20th Century version of the modern ghost hunter. She didn’t have access to all the slick electronic toys – when she started she didn’t even have electricity! Tweedale and her fellows relied on mediums and the “psychic attunement” of their minds and belief systems.

Published in 1920, Ghosts I Have Seen makes claims of paranormal sightings that none of today’s ghost enthusiasts can come close to matching, even with the arsenal of high-tech tools at their disposal.

Tweedale tells of dozens of confrontation with bona fide ghosts encountered in the flesh – and I mean in the flesh. She relates a plethora of stories of seeing dead people that look every bit as real and solid as any living person. But that’s only for starters. Tweedale also reports on her (or other’s) encounters with:

• Mythical creatures, such as satyrs

Tweedale was a British aristocrat of the top order. She traveled among the supreme upper crust of British royalty – her book is replete with references to lords and ladies, baron, baronesses, counts and countesses.

She was first and foremost a Scott. Her father was Robert Chambers, the publisher of Chamber’s Journal, a powerhouse publisher based in Edinburgh. This in turn allowed her to consort with some of the most illustrious literati of all time, including the likes of poet Robert Browning and artists Frederic Leighton and John Mallais. She was also an associate of the famous Madam Blavatsky, founder of Theosophy.

The question is: How believable are her stories? They’re sensational, certainly. Was Tweedale a bored intellectual society heiress showing off her useless education to fill the endless days of tedium of the wealthy elite – the teas, the gala balls, the society functions, attending to the affairs of her castle-like dwellings? Or did her wealth allow her the freedom to probe deeper into the world of mysticism and esoteric in a way that was meaningful and legitimate?

It may be a bit of both. My impression in reading Ghosts I Have Seen is that Tweedale indeed was witness to some pretty bizarre phenomenon. After all, her stomping grounds were the ancient, stony castles of northern Scotland.

Imagine how picturesque! Centuries old drafty, dreary monstrosities with real dungeons. There thousands of poor souls were tortured or murdered in dark holes – locations where the political machinations of the Scottish clans played out their blood revenges and plots against Scot, Celt and Saxon alike.

It must be said that Tweedale, despite her wealth and position, was a hard-working novelist and writer. She produced more than 30 books. But she was also known to be a political activist, philanthropist and frequently got her hands dirty by working down in the trenches with the lowest tier of society.

In one segment, she mentions sitting with a prostitute while the pathetic woman was slowly dying in a poor house bed – a depressing facility where Tweedale worked as a volunteer to aid those at the bottom rung of Britain’s slums.

It would seem that VIOLET TWEEDALE was a woman of intelligence and character. Because of this, I am willing to give her a bit of leeway and accept some of her personal tales of ghost encounters with some credibility.

All in all, this is an interesting enough read. It often rambles and should have at least 50 pages edited out. There are pointless digressions. It’s interesting to observe how ghost hunting today and ghost hunting 100 years ago is more or less the same – if anything, today’s high-tech paranormal investigators seem behind the curve compared to Violate Tweedale.