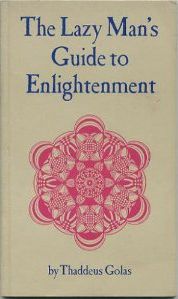 Many years ago when the world was all green and I was in my 20s I came across a thin volume in a bookstore. It was The Lazy Man’s Guide to Enlightenment by THADDEUS GOLAS. Even though it was like, five bucks, but obviously only a couple hour’s read, I still plunked down an Abe and took it home.

This little volume really blew me away those many years ago. I thought it was an elegant piece of literature. It was written in a groovy 1960s style. The concepts presented were profound, but at the same time not lofty, preachy or pretentious. Or I should say, the ideas were lofty without seeming lofty. What Golas was saying was amazing – yet believable – and it made sense to me. It had the ring of truth.

Now, some 30 years later – much older, wiser, more skeptical and jaded – I continue to consider Thaddeus Golas’ book a small masterpiece. More than three decades on, it reads just as fresh. Better yet, the ideas presented here have an untarnished aura of legitimacy and authenticity.

Thaddeus Golas was a Polish-American born in New Jersey, and at first lived what could be called a normal life. His gift for writing was noticed early by his teachers, and as a young adult worked for a while as an editor and in the publishing industry. He served with competence in World War II in the 604th Engineer Camouflage Battalion. He was rejected for service at first because of bad eyesight, but managed to “trick” his way into the Army anyway.

After the war, Golas eventually became part of the counterculture – first a beatnik hanging around all the cool locations in New York, and consorting with other counterculture icons, such as Allen Ginsberg and the soon-to-be notorious Timothy Leary.

Golas’ beatnik days transitioned naturally into aging hippy status, and he moved west and hung out “on the scene,” dropping a lot of acid and scraping by like a classic dharma bum on little or no cash. He wrote this book while “sitting penniless in my San Francisco apartment” he mentions in ‘Lazy Man’s’.

Although he never came close to achieving the legendary counterculture status of a Ginsberg or a Leary, or even someone like Ram Dass, Lazy Man’s Guide to Enlightenment became a major underground cult hit. It was said that Ginsberg and Leary were envious of Golas’ ability to sell books.

How would I describe what’s in the pages of this short book? It most closely resembles Zen philosophy, but mixed in with a smattering of modern physics, some LSD-induced visionary revelation – but mostly, this reads like something that is entirely unique and fresh, even if the most fundamental concepts can be found in other esoteric philosophies – especially the best Zen writings, such as that found in “Zen Mind Beginner’s Mind,” the marvelous book by Zen Master D.T. Suzuki.

The Lazy Man’s Guide to Enlightenment eventually went out of print, but it has been recently resurrected by SEED CENTER BOOKS, where you can purchase a paperback version. It’s also available as a Kindle selection – but if you want to, you can read it for free here: LAZY MAN’S GUIDE

Note that the free online version of Lazy Man’s Guide To Enlightenment is not technically an ebook because it’s not formatted in any downloadable formats as far as I can see. You’ll have to read it on your computer screen. But it’s a short read, and even if you don’t like reading straight from the computer screen, it’s easy to get through.

Do yourself a favor. Check out The Lazy Man’s Guide to Enlightenment. It’s truly a timeless classic. In fact, it gives the concept of “timeless” all new meaning – as you will discover for yourself.