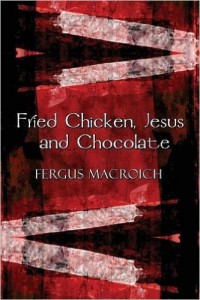 This is a remarkable piece of literature that can be read on many different levels because there’s a multi-tiered strata of meaning within the narrative. What comes forward depends on what each reader “brings to the table,” so to speak, while turning the pages.

On the outside it would appear to be a tale of gritty and brutal realism featuring a supremely unfortunate child born to a heroin-addict mother living in deplorable squalor and desperate poverty in some stark flophouse.

But we must quickly distance ourselves from our concepts of “realism” because, early on, subtle mystical elements appear to dance just around the edges of the story, although the latter might be almost invisible to the casual reader.

Before I go further, I should first deal with the decision of author FERGUS MACROICH to narrate his tale using what I guess I’ll call the “Ebonic Voice” – that is, the mode of speech common to many black Americans. Here’s a sample:

“Night was the worst for Ishmael. A baby, he couldn’t walk out of his crib. Go to the store and feed his own self. Had to lay in his crate. Waiting to be fed. But the woman in the other room didn’t have no milk. And Willy was gone. Maybe looking for a real cow. When he cried the woman slept right through.”

I think more readers will appreciate this book if they understand something in literature called “The Uncle Charles Principle.” This is a technique originated by (or at least credited to) the great Irish writer James Joyce.

Using the Uncle Charles Principle, even when the author is writing from the omniscient point of view, he or she may write in a way that matches the way a character might speak, act and think.

So, in this case we have the viewpoint character Ishmael who naturally speaks and thinks in the Ebonic voice – yet the entire narrative reads “Ebonic” even when we are not inside the head of the character, and while the author is describing what is happening to Ishmael.

Some might find it odd or wrenching that, even if an author is white, he is writing as if mimicking the urban street-lingo of a black man. But this is the Uncle Charles Principle at work, and it is a well-accepted literary technique. The best-selling writer Cormac McCarthy, for example, is known to make frequent use of this technique.

I’ll warn you that if you’re looking for the “feel good” read of the year, FRIED CHICKEN, JESUS AND CHOCOLATE is not it. I found it difficult indeed to enter into and then keeping going back to the dark and desperate world of Ishmael.

I hasten to add that this is what makes this book a fine piece of writing – and it’s exactly why you should get this book and read it – if to not exactly enjoy it, but to appreciate or be emotionally moved by a wrenching story.

The purpose of art is to make you feel something intensely, whether that something is joy, horror, wonder, despair, misery or delight. This book is not so much a painful punch in the gut, as it is a slow IV drip of syrupy misery pumped into your veins.

Any caring human being with a soul (or a pulse) will be dragged to a dreary melancholy as he/she confronts poor baby Ishmael eating live cockroaches and flies to stave off starvation while  wallowing in his own filth, his urine and feces-packed diapers. He is ignored for hours or days on end as his heroin-dazed mother lies comatose in the next room on a pile of filthy newspapers.

Pay special attention to the fact that toddler Ishmael also eats lead-tainted paint chips, which has been associated with brain damage in young children, especially children of poverty.

Ishmael’s only socialization comes from an erstwhile, yet kindly-boyfriend-heroin-supplier to his mother, and also hours-on-end of watching violent-yet-loony Wiley E. Coyote cartoons.

So desperate is Ishmael to make a deeper connection with some significant “Other” he adopts a spider in the window as his “mother,” and this connection is deep and psychological.

When circumstances eventually rescue Ishmael from his heroin den of death home, it would be a vast understatement to say that here we have a child who has been conditioned in a unique way to confront the “real world.” How will he manage? Can he ever thrive? Will he implode? Does he even have a chance?

Now I want to briefly touch on the mystical elements of this story.

Overtly, Jesus and Biblical Scripture comes to play a large role in Ishmael’s life after he is exposed to these elements by his grandmother. However the “Jesus” imprinted on the perception of Ishmael is a surface-level figure of Christ based on imagery – a poster of a “Black Jesus” – while at the same time, Ishmael seems to develop a direct psychic connection with a Jesus that I would say is not the mainstream “American Jesus,” nor even a Gnostic Jesus but a mysterious, almost Hermetic kind of Jesus. 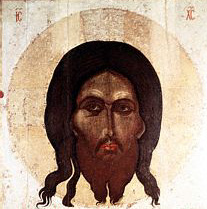 And yet, this Jesus is not averse to Old Testament habits – such as admonishing his followers against gluttony and lust, even though Ishmael fairly starves throughout the book, and never comes close to “gettin’ any.”

Beyond this, I would argue that there is a far deeper and stronger mystical-spiritual element implied, and that involves the imagery of the spider.

It can’t be an accident that Ishmael not only adopts a real spider as his first true “mother,” but comes to see his grandmother as a “Spider Woman.” Ishmael’s first spate of trouble with authority comes after he violently beats a fellow student for killing a spider.

As any student of anthropology, myth and folklore will tell you, the spider motif, and especially the “Spider-As-Woman” is among the deepest and most ancient of mythic archetypes. It’s found throughout an array of ancient cultures. Stylized spider depictions have appeared independently among diverse societies, even if they are separated by oceans and continents. Some suggest that one of the most ancient mystical “power symbols,” the swastika, has its origin/inspiration in the central element of a spider’s web design. 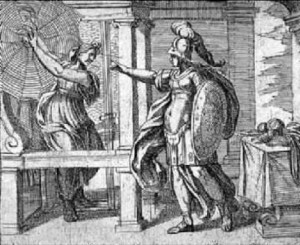 In Greco-Roman mythology, Arachne has a weaving contest with the goddess Athena. Arachne wins. Spiders are called “arachnids” after Arachne.

The spider is always a goddess figure. Some scholars say this explains why the crafts of spinning fabrics and weaving have always been the sole bailiwick of women. The spider woman-goddess – rooted in ancient times when all societies were matriarchal – is the primal architect of the Universe. Her spinning and weaving virtually knits together all reality.

It’s almost as if Ishmael’s brutal upbringing (along with brain damage from eating lead-based paints and malnutrition) has severely suppressed  his intellectual ability, but this in turn has allowed his psyche to have a direct penetration to a deeper well of ancient mystical knowledge and guidance, here symbolized by the ancient Spider-Woman-Goddess paradigm.

It’s possible that I’m reading more into this than I should, but then again, it hardly matters. Fried Chicken, Jesus and Chocolate is that kind of book. Again, this book can be read on any level the reader chooses. None of those levels would be “wrong.” The gritty realism is stark and obvious, but the abstract elements are there, too, just below the surface, but sometimes not so hidden, in my view. 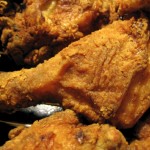 (Note: I’m not even going to discuss the significance of the chicken and the chocolate. Why? Because I’ve blabbed on long enough!)

It all makes this one of the most fascinating and vexing books I have read in some time.

If you’re like me, always hungry for a read that is truly different and which transcends so much that is run-of-the-mill in most books today, then here is a read to beguile you, disturb you, challenge you, thrust you out of your comfort zone, while still leaving you wanting more. Anyone not emotionally moved by this text would have to be psychically numb, or dead.

One thought on “Fried Chicken, Jesus and Chocolate by author Fergus MacRoich is a grim, gritty but mystical American tale of poverty, drug abuse and transcendence”