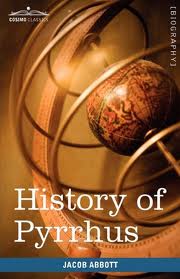 Imagine a land where the king is an absolute ruler but also a completely incompetent administrator. And now imagine this same king is the most brilliant military general ever to live – he can attack other nations at will, crush their defenses and plunder their cities. None can stand against him.

And yet, after he conquers, he quickly loses interest in governing. The result is that his grip on what he has just taken over rapidly crumbles. So this mighty genius general-incompetent king always reacts in the same way: He just seeks out another land to vanquish … and the next … and the next … always staying a step ahead of the last conquest-turned-debacle he leaves behind.

This is amazing and frustrating story of Pyrrhus, second cousin to Alexander the Great. Pyrrhus was King of Epirus and, for a time, Macedon. He was the man the great general Hannibal himself named as “the greatest commander the world had ever seen.”

To gain a true understanding of Pyrrhus, the reader must patiently take in a great deal of context and understand the complex relationships of the ancient world of circa 300 B.C. It was an era of nation states, where nations of Greek-speaking peoples dominated the world and when Rome was still a developing power. The glory of Egypt and other Middle East empires, although still significant, had long since diminished from their heights.

Alexander the Great overran the known world between 336 B.C. and 323 B.C., but as soon as the great man died, an immediate power vacuum gaped open. Alexander’s many generals began vying against each other to ascend to the throne of the empire they had just helped carve out. But jealousy, rivalries, rebellious states that wanted to become “unconquered” and power-mad personalities soon threw the Mediterranean world into a roiling kind back-and-forth struggle for someone to emerge as supreme ruler of … of … well, as much as he could rule.

Into this milieu Pyrrhus was born, the son of Aeacides, who had ascended to the throne of Epirus upon the death of Alexander. His mother was Phthia, the daughter of a high-ranking Thessalian cavalry officer. By all accounts, Pyrrhus was handsome, charming, highly intelligent, physically powerful, gallant, a gentleman –- but in possession of a ravenous appetite for war.

So in this free ebook written by the venerable 19th Century American educator JACOB. C ABBOTT, we get an complete – albeit somewhat brief – view of the life and times of the great Pyrrhus.

Abbott is among my favorite writers of short historical treatments of famous figures of history. Most of his MAKERS OF HISTORY series are written in a style that would seem designed to be accessible to the average high school student or young adult of the mid-to-later-1800s. At the same time, these works never bore or insult the intelligence of a reader of any age. Abbott’s still read fresh today.

In this treatment of Pyrrhus, Mr. Abbott again works his patient magic, sifting through an enormously complex period of history, and providing us with just enough detail to not only understand the man, but the times he lived within. Reading one of Abbott’s “Makers of History” series is, without fail, an enriching experience.