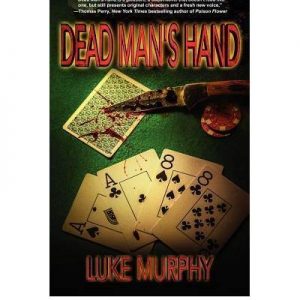 Calvin Watters is a brutal thug — in exchange for a payday, he’ll cut of a man’s finger with a tin snip or smash off a toe with a hammer. The people he works for are greedy bookies and casino owners who worship at the altar of money and power in the Bad Taste Capital of the World, Las Vegas.

But not to worry, Calvin Watters is the hero of this crime thriller and his story arc will take him from angry-at-the-world punisher-for-pay to a kind of righteous, cop-friendly big ol’ Teddy Bear.

Calvin Watters shares the protagonist stage of DEAD MAN’S HAND with Las Vegas Police Department Detective Dale Dayton. He is brought into the plot when one of Vegas’ biggest casino owners is brutally murdered. It’s Dayton’s job to catch the killer.

Watters gets entangled in the whole mess when a conspiracy among conniving creeps attempts to frame him for the murder. Watters is seen a perfect fall guy — he hangs out with sleaze, lives and works on the criminal edge, has been arrested a few times — and he’s black.

There’s much to like about this tightly written, fast-paced crime thriller with an excellent plot involving greed, conspiracy and murder. The character of Calvin Watters is vividly drawn — he’s complex, dark, alienated and violent, and yet embodies a heroic aura that is engaging and charismatic.

The action scenes are well handled. The violent murders give us just enough visceral feel for their horror and brutality, but without dwelling on them overlong for prurient interest or gratuitous effect.

Author LUKE MURPHY also has a tremendous feel for Nevada’s Sin City. Murphy lives and writes out of a small town in Canada — and yet, readers will feel the hot streets of Vegas thumping out from these pages as if Murphy penned this novel while sitting on an orange crate in a dicey studio apartment with dirt streaked windows six blocks off The Strip.

It all makes for a standard, fast-paced summer-on-the-beach read that will keep you turning pages to reach to a clean, no-aftertaste denouement that wraps up in a nice bow.

I chose the descriptive word “standard” in the sentence above because there are many elements to DEAD MAN’S HAND which prevent it from rising above a rather formulaic genre novel, however. One reason is that all the supporting characters are basically cardboard cut-out props we’ve seen in thousands of crime novels, cop shows and movies.

Detective Dayton, for example, is a tough big city cop married to “The Job.” His wife has left him because he’s always working and never home. Now the only thing he has to go home to is an empty house. He mopes over his vacated marriage and buries himself in his police work to get his mind off his busted personal life. It sounds pretty familiar to me.

Carter Shaw (Deep Blue) is tough LAPD cop, wife divorced him because he was married to ‘The Job.’

Jimmy McNulty, tough Baltimore cop (The Wire), wife Elena divorced him because he was addicted to ‘The Job’ and booze.

NOTE: I rant in much greater detail about the cop-with-a-dead-wife-and/or-dead-marriage-issue in these two reviews:

SEASON OF THE HARVEST

All the other supporting characters are strictly off-the-shelf tropes, as well. For example:

Calvin’s girlfriend comes off as a weepy daylight drab. She’s the classic ex-hooker with a heart of gold. Her personality is about as stimulating as a wax bean. Her only role is to cling to Calvin and moan about his safety, offer him sex and, I suppose,  wring her hands in her spare time.

The primary antagonist is Ace Sanders, and with a name like “Ace” you just know he is a Vegas gambling big shot. He’s driven by a lust for power and money to do a lot of bad things. We don’t know we he’s that way because we are offered no background or origin story for Ace, which makes this character flat as a taco wrapper.

Even the former U.S. Marine Corps sniper dude — now gone bad and working as a paid-for-hire assassin — comes off as a hollow stand-in because we’ve all seen this trope so many times now in books and movies.

There are other aspect of this book which rob it of that edge-of-your seat tension it might have had — but already I’ve gone on long enough and my further comments may devolve to petty bickering — so I’ll leave it there.

All in all, this book gets my recommendation, however. Despite a few drawbacks, It’s a taut-enough thriller with an adequate level of escapism and action to provide you with more than enough entertainment to make you feel like you got your money’s worth.