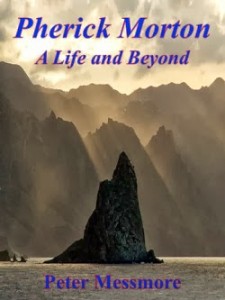 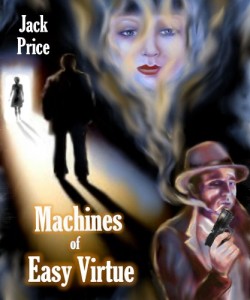 So here is a writer who trims the fat from his prose; it’s all lean. The dialogue is snappy, the sentences crisp, the observations pithy, the action scenes crackle up, explode then dissipate rapidly leaving no aftertaste — just good clean fun.

When the author dubbed his yarn MACHINES OF EASY VIRTUE he meant really easy. Believe me, these anatomically correct androids come out of the factory generously equipped. The technicians didn’t scrimp on the screwdrivers, if you know what I mean. The robots in the world of JACK PRICE give a whole new meaning to the term “tool” and “package” — their software may be soft, but these machines are hardwired for maximum pleasure.

It’s one thing when a high society millionaire starts getting a little on the side from the maid; but it’s quite another when the maid is a robot. And when the robot maid and robot butler get a hankering for each other and start a mechanical shag-a-thon on the kitchen floor — and then the flesh-and-blood master walks in on it – well, you know, life gets complicated.

Somebody could get killed.

You see, Bourbon is down on his luck. He’s almost out on his ass. His apartment rent is unpaid so he sleeps in his sleazy inner-city office – but he’s behind on the rent there, too.

That means when a classy dame with sexy long legs straight up to her business section strolls in with a crazy-dangerous job and a pile of cash, you jump on it – and you try to jump her, too, at the first opportunity.

Yeah, there’ll be cash, there’ll be some pleasure along the way. But getting’ up to your neck in the lusty affairs of the rich and powerful get can you clipped – and fast. You never know who your friends are. Your old buddy on the Chicago P.D.’s got your back – except when he doesn’t. The dame who’s payin’ you might be settin’ you up – you just never know.

When you’re Red Bourbon, private eye, you’re on your own. Sometimes the only thing between you and another meal is how fast you can draw your Glock, or kick some thug in the jewels and then knee-up his ugly face.

That’s right. The future has arrived. Cars drive themselves, robots do all the scut work and the Artificial Intelligence ap on your smartphone is your only true friend. Sometimes making a living is more like making a dying — but, hey, you signed up for it.