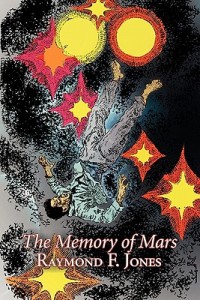 Imagine this: You first met your wife way back in grade school, in the third grade. You grew up together in a small town. You were high school sweethearts, then married and shared years of a happy life. Your wife is suddenly seriously injured in a car accident. The surgeons in the operating room are shocked to discover that she is not a human being. Inside, they find no heart, lungs, stomach, but a mass of weird green organs — she’s an alien.

Sound like a sizzling scenario for a great science fiction yarn? It is, and RAYMOND F. JONES takes a great idea and leads his readers through a confounding mystery that will have you turning the pages, believe me.

THE MEMORY OF MARS (CLICK TO GET FREE) is an example of early 1960s pulp science fiction that rises above the standard space opera schlock that filled many of these publications, in this case, the December 1961 issue of Amazing Stories.

This story preceded by five years Philip K. Dick’s masterful short story, “We Can Remember It For You Wholesale,” in The Magazine of Fantasy & Science Fiction. Both stories bear a similar premise – a man who is struggling with real or unreal bizarre memories of events that occurred on a vacation to Mars – that may or may not have happened!

In the hands of Philip Dick the story is a bona fide work of genius. In the case of The Memory of Mars and author Raymond Jones, the story is good – but, well it doesn’t rise to that exulted level.

Although The Memory of Mars is a terrific piece it falters badly in the denouement. It almost seems like the author realized that he had written himself into a corner by spinning an extremely cunning tale.

Thus, to resolve the mystery of the story – he punts. He opts for a standard plot gimmick – he introduces a new character near the end of the story who conveniently steps in to explain everything. For me, it was a letdown.

Instead of the hero using his intelligence, bravery and cleverness to wrench a solution to his problem through intense action, everything is finally handed to him on a plate. Furthermore, part of the explanation – of how his wife could be an alien and why he has strange memories — is a science fiction cliché – I won’t tell you what it is because I don’t want to spoil the ending for you.

Certainly some may disagree with how I feel about the ending, and there is an additional final twist that is wonderful. The Memory of Mars is an example of sci-fi pulp that rises well above the standard of the genre. It’s more than worth your time and a read.