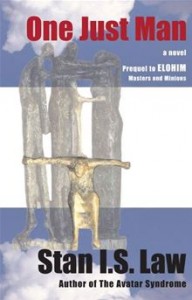 Two central motifs that pervade ONE JUST MAN center on dualism and paradox. And so it is appropriate that my review will be somewhat dualistic and paradoxical. That is, I am going to very highly recommend this book, but I will also offer some rather sharp criticism.

The premise is one common in literature: a man who has a Messiah complex, or a man who really is the Messiah, but doesn’t know it yet. It’s a theme that pops up across all genres: In science fiction there is Michael Morcock’s “Behold the Man” and Philip K. Dick’s “The Divine Invasion.” In New Age literature there’s Richard Bach’s Don Shimoda. In contemporary literature Chuck Palahnuik’s creates Victor Mancini. In classic literature there are many: Camus’ Meursault, for example. Of course, Nikos Kazantzakis reimagined Christ himself in his 1953 classic, “The Last Temptation of Christ.”

In ONE JUST MAN, then, we have Dr. Peter Thornton, a brilliant, up-and-coming Montreal physician who slowly begins to realize his powers of healing go well beyond medical science. He’s a resistant and reluctant messiah, but eventually his “gift’ overpowers him. As the novel progresses, he must accept his fate for what he is.

Because the best fiction is based on character author STAN I.S. LAW scores high marks for crafting a viewpoint character in a way that is subtle yet powerful – but it is another character that looms over every moment of the narrative in an even more subtle and powerful way – the family butler Winston Smith.

Imagine if you could a mix of Batman’s man Alfred with the legendary Hermes Trismegistus. Or maybe if you combined equal amount John the Baptist, Simon Magus, Erwin Schrödinger and Sir John Gielgud – you would then have the mysterious Winston Smith.

The first third of the novel is absorbing because Dr. Thornton’s fierce introspective struggles are compelling. We meet a cold-as-ice clinician who is the consummate professional, yet has a penchant for sleazy liaisons; he “relieves tension” by banging nurses in hospital linen closets, only to forget their faces before he gets his pants zipped up. All his off duty time is spent in heartless, robotic study of the chemistry and plumbing of the human body so that he can become the most efficient doctor, more akin to a mechanic of bodies than a healer of people with souls.

To paraphrase Viktor Frankl (echoing any number of Zen masters): “One does not pursue enlightenment; it must ensue.” This is the case with Peter Thornton. The time comes when he can no longer deny the reality that he has the power to heal by touch. His transcendence from ordinary doctor to messianic healer happens quietly but definitely. He doesn’t ask for it, but he gets it.

Thornton suddenly cannot suffer personal material wealth and possessions; prestige means nothing; all goals and graspings drop away. He becomes a simple “faith healer” of men, banishing pain, disease and suffering with a touch.

But then the novel goes drastically off course. Peter Thornton becomes a conduit for healing, but he has no control over his gift. The power of healing nearly kills him, even as it gives life to others. He then is rescued by the mysterious Winston Smith and proceeds to enter upon a long period of convalescence. Unfortunately for the reader, this period of integration involves endless discussion and heady philosophizing with his girlfriend in a remote cabin in the Canadian wilderness.

There’s a lot of lofty philosophical blather, but nothing happens.

All tension is drained from the narrative. Thornton and his partner are free to enjoy food, sex, blissful natural vistas and starlight as they ponder the enigmatic duality of soul and spirit, the paradox of matter as energy, and the numbing conclusion that a particle singularity exists simultaneous as a wave form.

One of the most inexplicable choices the author makes is to reduce Dr. Thornton’s love interest from a brilliant, beautiful, powerful woman crackling with aggressive sexuality into a simpering girlish sycophant – she goes from being one of the world’s most erudite physicists to a mildly confused scrub woman, cook and sex partner for her exulted new Messiah, who adopts the appallingly pretentious (egotistical?) name, Petrus Latter.

I mean, if the original Jesus Christ was as preachy, dull and bordering on maudlin as this guy, it’s little wonder he was crucified.

What seems to be happening here is that the author has contrived a fictional scenario to serve as a vehicle to deliver his metaphysical determinations – he does an excellent job of creating interesting, vivid characters, but then settles in to string them like puppets, commanding them to chatter on about the nature of human reality, physical reality and consciousness – and about how all of it is informed by implications falling out from quantum theory.

But does the author at least present a sound philosophy and metaphysics? Yes, he certainly does – and he does so with great lucidity and eloquence. Stan I.S. Law is obviously a brilliant guy, and a writer with a great heart. He is a marvelously elegant wordsmith. His prose is effortless and beautiful. However, in the meta-analysis, there is not a single revelation being made here that isn’t already known by a large segment of today’s reading public.

So the measure of how much you enjoy this novel depends on the level to which you understand timeless, universal principles of metaphysics (Vedic, Buddhist and Gnostic Christian ), and your awareness of how modern quantum mechanics appears to support what enlightened visionaries have been shouting out to us for millennia.

If you don’t know a lot of this stuff, you’ll find this book a scintillating, mind expanding feast. But if you already have at least an intellectual understanding of the metaphysical concepts presented here, you might be bored stiff through the last half of the book.