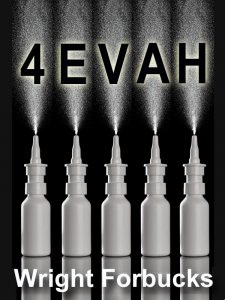 Here’s the thing about a short story: The writer has very few words to create a satisfying piece of fiction. Writing a great short story is one if literature’s most difficult feats. That’s because, ideally, you should masterfully include the four basic elements of literature: Plot, character, setting and theme.

If you fail at any one of the four, the short story is a bust.

The great writers who have proven themselves can break the rules or ignore the “same old” because they have paid their dues and earned some artistic license to create an innovative piece of writing. But if you are an unknown author with little or no reputation, you better be paying attention to plot, character, setting and theme.

This short story, 4EVAH by WRIGHT FORBUCKS, doesn’t get the job done. There no real plot here – only a scenario, or maybe a premise – a drug has been invented that bestows an unlimited lifespan upon the user. The story describes how such a drug might reshape society and the consequences it has for things like population control, social structure and war.

But lots of speculation about the crazy kind of world an immortality drug might create is not really a plot which a believable viewpoint character can work through as the readers cheers him or her along.

That’s what drives a great story – a vivid, sharply-defined character struggling to solve a problem as he/she works though a plot, heading toward a happy or tragic conclusion.

What we get here is a vague, poorly developed character – with a rather snarky and irritating voice– describing his school, telling us about this, telling us about that, calling this person a “moron” and that person “stupid” – which is merely annoying and not at all compelling.