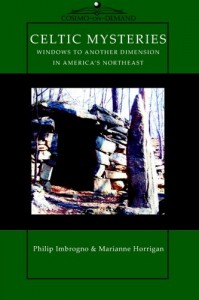 Wow – let me tell you something, it pays to do a little research on the side before you prepare to review a book.

I was about to give this book, CELTIC MYSTERIES: WINDOWS TO ANOTHER DIMENSION IN AMERICA’S NORTHEAST maybe a “B” or perhaps something like a 7-out-of-10 rating – then I stumble on the “big news.”

Apparently one of the authors, the prolific Philip J. Imbrogno, who is among the most respected paranormal researchers, is a fraud. That is, Imbrogno apparently has not only been “padding his resume” all these years, but also seems to have been lying about a lot of other life experiences as well – including having served in Vietnam as a member of an elite Special Forces unit.

Imbrogno claims no less that this:

Holds an undergraduate and graduate degrees in physics, astronomy and chemistry from the University of Texas and the Massachusetts Institute of Technology. In 2010, awarded a Ph.D. in theoretical chemistry from MIT. Staff member of the McCarthy Observatory in New Milford, Connecticut, and is a founder and former director of the Astronomical Society of Greenwich, and former director of the Bowman Observatory.

But then well-known skeptic Lance Moody decided one day – apparently just for the heck of it – to see if he could verify Imbrogno’s credentials with MIT. The folks at MIT professed to have never heard of him. They said they never graduated any Philip Imbrogno from anything.

To make a long story short, Imbrogno’s credibility has been destroyed. He announced he is “leaving the paranormal field.” The co-author of his latest book, Rosemary Ellen Guiley, announced on her web site that she has cut ties with Imbrogno, and also stated she was “blindsided” by the recent revelations.

So what about this book? I mean, It also has a co-author, Marianne Horrigan, whose reputation is still intact, I assume. I don’t know. It’s a tragedy, I guess. She probably gets taken down with her co-author, at least for the sake of this book. Remember, Imbrogno first became famous and respected as co-authoring a landmark UFO book with the late great J. Allen Hynek.

It’s too bad because the information in the book appears based on some solid in-the-field legwork and careful research in the dusty archive rooms of libraries and historical societies.

The evidence they present is somewhat impressive. The general consensus among the scientific community and public is that these stone structures are nothing more than root cellars built by early American colonists. But the authors show that some of the stone structures are marked with characters of Ogam – an early medieval alphabet used by the ancient Celts. This claim was verified by respected Harvard scholar Dr. Barry Fell.

Imbrogno also claims to have found an obsidian dagger in one of the chambers which was examined at the University of Pennsylvania. It was determined to have originated in either Greenland or Iceland and may be at least 4,000 years old.

Imbrogno and Horrigan also give us exacting details and descriptions of a variety of the stone structures, and based on what they tell us, it seems impossible to believe all of them could have been merely root cellars. For example, some contain at least what appear to be “sacrificial tables” and others are multi-chambered and form alignments with astronomical events, such as the spring equinox, similar to Stonehenge in England.

But they also veer wildly into heavy New Agey, nonscientific territory that would make even mild skeptics gasp – as when they bring in psychics who make contact with the spirits of deceased Native Americans and Druid priests.

Yet – what has always made me willing to give Imbrogno something of a pass on his more outlandish claims was the fact that he had stellar credentials – I mean, he is an MIT-trained scientist with a lofty Ph.D in a very exacting scientific field, right? Well … wrong.

Does this mean we should throw out the baby with the bathwater? Could it be that Imbrogno has done legitimate work in the field of UFO investigation and other areas? Does Celtic Mysteries still make a credible argument that stone monuments in New England were built by ancient Europeans? Perhaps, but alas, but it probably doesn’t matter now. Others will have to make the case.