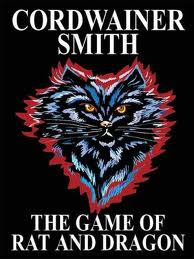 CORDWAINER SMITH was more than a science fiction writer in many ways. His writing is a strangely shimmering, stand-out phenomenon within a genre that prides itself on innovation and creativity. His style was not only strikingly distinctive, but at once weirdly disturbing yet enchanting. Behind every story, the reader could sense a larger, fully envisioned fictional universe – which indeed there was.

Smith wasn’t only a science fiction writer – in fact, this was merely a minor, part-time hobby for him. His real name was Dr. Paul Linebarger. He was a Ph.D. scholar of Eastern Asian studies, and a deep government insider. Smith, or Linebarger, was known to be an expert in propaganda. His book, “PSYCHOLOGICAL WARFARE” published in 1948 is considered a classic in the field.

Cordwainer Smith came to the attention of the science fiction community when he published his short story, “Scanners Live in Vain” in an obscure publication, Fantasy Book, in 1950. It created a sensation, if not among a lot of reader, but within the community of science fiction elites. Great writers and editors, especially Frederick Pohl, recognized “Scanners” as a work of genius.

“Scanners Live In Vain” also set off a something of a vexing mystery among the science fiction insiders. Who was he? Cordwainer Smith was obviously a pen name. Many believed he was – must be! — one of the old masters. Among the most popular theories was that Cordwainer Smith might be Jack Vance. Of course, the reality turned out to be even more interesting.

So — this free Kindle ebook (AND AVAILABLE HERE FREE IN MOST FORMATS), The Game of Rat and Dragon, is a short story which is a superb introduction to the charm and intelligence of this enigmatic writer. It’s a far, far future tale in which space travelers have developed an extremely peculiar method of interstellar space travel that requires the use of cats. Smith was known to be an ardent cat owner and lover (before it was universally cool).

Hope you love it as much as I did.