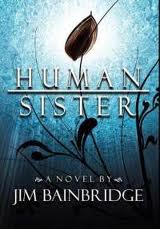 Mary Shelley’s paradigm-busting 1818 novel, Frankenstein, is subtitled “The New Prometheus,” referencing the theme of man’s constant striving to overreach himself and play god, which always seems to bring disastrous results. Prometheus was chained to a rock by Zeus to have his liver pecked out by an eagle. Victor Frankenstein’s monster murdered his creator’s young bride and brother. Then the monster kills the man who gave him life before lumbering off in self-loathing to the North Pole to destroy himself in flame.

The first known writing of Prometheus dates to about 800 B.C. It was made more famous by Aeschylus in his play, Prometheus Bound, circa 500 B.C. – and so onto Shelley’s Frankenstein in the 19th century – and all the way up to today in many incarnations, including this marvelous novel, HUMAN SISTER.

In the ancient past, we needed the archetype of Prometheus to deal with the spiritual schism between ourselves and the transcendent gods. But since the dawn of rational, empirical, materialistic science, we still grasp at Prometheus, but now it’s to help us deal with the relationship between man and science. It’s painfully obvious that many of our brilliant advances have turned out to be double-edged swords. Think about nuclear power. It was supposed to usher in a new age of prosperity and unlimited energy – but it has also pushed us to the edge of total annihilation.

So this scenario is played out yet again by JIM BAINBRIDGE in Human Sister, except this time the Frankenstein monsters are androids – and also bioroids – robots that are getting ever closer in make-up to human beings.

Instead of Victor Frankenstein, we have Professor Severn “Grandpa” Jensen, who might have been modeled on the physicist Robert Oppenheimer, the “father of the atomic bomb.” Like Oppenheimer, Jensen is a brilliant scientist much used and abused by the paranoid machinations of the U.S. government and military – only to be cast aside when he outlasts his utility and becomes less than cooperative.

The viewpoint character is Professor Jenson’s granddaughter, Sara Jenson – our titular “human sister” — given over by her distracted parents to be raised by her grandparents.

Sara is the ultimate symbol of humanity, human warmth, human love. She is innocent, a poetic soul, incredibly generous, loving, kind, pure of heart, altruistic – but she is callously used and manipulated (or not, you decide) to become the experimental bridge between the lifeless, cold materialism of science and everything that is naturally alive, spiritual and beautiful.

My fellow readers, make no mistake — Human Sister is an absolutely wonderful novel. It is beautifully, artfully and even poetically written. It masterfully retells the Promethean tale for us in just the way it urgently needs to be retold today – addressing all of the fears, anxieties and hopes that computer technology is thrusting upon us at a frightening pace.

Bainbridge has made ancient mythology exactingly relevant to our modern times – the current political climate, the world’s “war on terrorism,” the rights of privacy, to torture or not to torture, the influence of fundamentalist religion on American politics – and more.

For those of you who might shy away from a book that sounds like a hyper-intellectual study of post-modern society and technological determinism – don’t!

This works just fine as a fun science fiction read, populated with cool robots, moon bases and Mars colonies, fascinating high-tech gadgets, and, best of all, vivid characters that are both heroic and complex, all of whom readers will eagerly cheer on, right up to the end.

I can’t imagine that Human Sister won’t be a contender for science fiction’s highest honor – the Hugo Award. It’s that good.