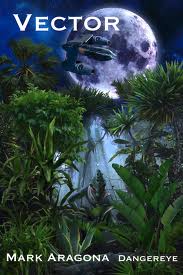 Vector is one among a collection of science fiction short stories in THE EXTRATERRESTRIAL ANTHOLOGY by a group of writers calling themselves DANGEREYE. It’s something of a miracle that I read Vector at all. That’s because after reading one of the other selections in this anthology, I was appalled by the truly amateurish, low quality of the offering – and I shall not name that story or its author here.

Thus I was pleasantly surprised when I read Mark Aragona’s piece which is a twist on the extremely pervasive zombie meme that is infecting so much of our entertainment culture today. Normally I would consider that a bad thing – yikes! yet another tale of the undead trying to eat the living! — but Aragona is a strong writer with a good sense for the plot and pacing of a short story. The characterization is skillful, the action never drags, the imagery is vivid and this tale even has a theme and message.

I would say Vector is written as well as any story you might find in one of today’s venerable science fiction magazines, such as Analog, Asimov’s Science Fiction or Fantasy and Science Fiction.

The only reason I’m not giving it my top recommendation is that it lacks originality. As I said, it leverages the zombie element, something we have seen in movie after movie and book after book in recent years. While this story is well handled, armies of ravenous, stumbling undead is soooo hackneyed — played! Worn-out! Done to death! (Pardon the pun).

The other reason I knock off points is for a certain lack of plausibility – such as the aliens taking great care to be immunized themselves against earth microorganisms that might be harmful to them – but somehow forgetting that their own germs and bacteria would infect the people of earth. That’s a pretty ridiculous!

But still, this story is well done. Aragona is a talented writer, believe you me. Overall, Vector is entertaining, fun, punchy – definitely recommended.