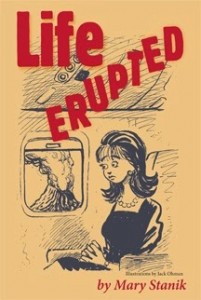 We don’t have to make any pretense that LIFE ERUPTED is anything more the a light romantic comedy with a central premise pulled straight out of a daytime soap opera. Author MARY STANIK concedes as much when she puts these words into the mouth of her character, Jenn Bergquist, near the end of the book:

“It is all too unreal. It’s like a soap opera, or some sappy movie … this is all too crazy.”

That’s pretty much sums it up. Life Erupted is a not just Chick Lit Lite, it’s Chick Lit Ultra-Lite.

Even the main character is borrowed right off the ol’ tube. Again, the author makes no bones about this, saying her heroine was inspired by Mary Richards of the MARY TYLER MOORE show. I have always thought that Mary Richards was a wafer-thin reincarnation of Marlo Thomas as Ann Marie in THAT GIRL. And now we see that the transmigration of the soul is possible because TV characters can be reborn onto the printed page.

Like Mary Richards, Jenn Berquist lives in Minneapolis and works in the media business. She she also sports the same hairstyle of that slightly earlier TV queen, Ann Marie. Both have that 1960s funky bouffant flip with blunt bangs held up by killer eyelashes.

Like Mary and Ann Marie, Jenn Bergquist is witty, spunky and bright, but as yet unlucky in love despite being a charming thirty-something hottie. Not too worry — you know she’s going to hook up with a handsome hunk sooner or later.

Thus, if you’re looking for a fluffy-feel-good fun read about a woman who wants to “have it all” and who’s going to “make it after all” — then buy the book and enjoy.

Okay, now let’s have a discussion:

The actual main character of Life Erupted is not Jenn Bergquist — but food — and to an astonishing degree.

Food is lovingly described, food is dwelled upon, food is a central aspect of the most important scenes. Even that which is tangentially related to food looms large in the background of the narrative, such as restaurants, menus, styles of food, traditions of food, kitchens and eating utensils. (I’m not making this up: In one scene a woman actually “holds onto her fork” for emotional support).

What’s truly remarkable is that in the central “plot payoff” scene of the book — wherein the main character is receiving a stunning life-altering revelation — the event takes a back seat to a stack of pancakes dripping with maple syrup, and not just any maple syrup, but maple syrup imported from Canada.

Further yet — while Jenn Berquist is wolfing down her mountain of flapjacks, her mind is already wandering off to a delicious contemplation of homemade muffins — and then she ponders further the idea of taking some muffins home for a future nosh.

The exciting trip to Iceland to chase erupting volcanoes recedes into the background as an examination of Icelandic cuisine ensues — the famous salted cod is discussed, as is other ocean fair, wines, juices, drinks, desserts and side dishes. Says Jenn Bergquist:

“I actually did eat a fair amount of fish. You were totally right, you have not eaten salmon or cod until you have eaten the Icelandic variety. But not so much with the vegetables, they are pretty expensive there and so we didn’t have many, save for a few $15 side salads.”

Fifteen bucks for a side salad! Certainly that would necessarily limit one to “a few.”

Now let’s leave food behind to discuss this books other major underlying them — the latent but raging Electra Complex of Jenn Bergquist.

You have probably heard about Freud’s theory of the Oedipus complex, but from Neo-Freudian psychology with get the Electra complex. It was proposed by the great Swiss psychologist Carl Jung. An Electra Complex is a daughter’s psychosexual competition with her mother for possession of her father.

The Electra Complex is also associated with a dwelling upon the defeat, displacement, death or pyscho-social death of the mother. In Life Erupted, in true Electra fashion, the author presents one mother as already dead and the “other mother” is slowly dying and then dutifully killed off before the tale ends.

At the same time, the only person who has a lot of exciting sex in this book is — you guessed it — Jenn’s aging father, the stoic and heavily repressed Olaf Bergquist.

In true Electra fashion, Jenn expends considerable psychic energy coming to grips with the burgeoning sex life of her father.

As for Jenn herself, she seems to have adopted that old maxim: If you can’t have sex, have chocolate — or pancakes, or lobster-stuffed ravioli, or salted cod, or muffins, or spicy pasta in marinara sauce, or angel food cake with blueberries, or Belgian chocolate dessert — or the “large slices of crusty, very tasty bread” — purchased for her by yet another father figure, her surrogate grandfather.

As for the woman — Caroline — who is providing sexual pleasure to Jenn’s father, she also dwells with powerful intensity on food even while she is angling for a night sex with Olaf during their first date at a restaurant.

Olaf Bergquist glumly looks across the table at the object of his sexual desire, the sizzling-sexy Caroline, only too observe that she:

Then Olaf asks Caroline if she ever had a chance to meet Jenn’s dying mother, but he sees the dismal sight of Caroline:

“ … carefully scraping chocolate from her plate, looking genuinely unhappy that there was nothing left of her dessert … “

The only thing our plucky heroine Jenn gets, by the way, is a cold date in frigid Iceland with a gay man.

In light of all this, it would seem that the obsession with food throughout the narrative serves as a kind of displacement for the frustrated sexual desire of Jenn Bergquist — which might lead us to the conclusion that the seething, exploding volcanoes of Iceland serve as the ultimate metaphor of a desire for explosive, orgasmic sexual fulfillment — never realized, except when projected onto the father.

So, you know … well, this is a pretty interesting book when you think about it.