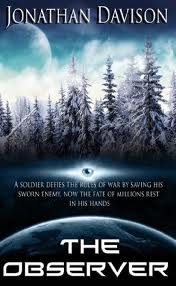 With his first venture into writing an “indie” novel, JONATHAN DAVISON demonstrates that he is a writer with a bright future. I found the majority of THE OBSERVER to be well paced, often compelling, and well-crafted. He ends chapters in a way that really makes the reader want to plunge ahead to the next chapter to find out what happens next.

Yes, certainly, this is a diamond in the rough. I’ll discuss some of those rough edges in a minute, but first, a very brief synopsis:

The story is set in the Ardennes Forest in the winter after the D-Day invasion in which the Allied Forces launched their final offensive against Nazi Germany. The fight was long, bitter and bloody. The story focuses on four British soldiers who become detached from their main unit in the snowy Ardennes. One of their band gets shot in the stomach, and his fellows make a heroic attempt to carry him out of their fox hole and back to where he can get medical attention.

As they trudge through the deep snow, they get lost, and nearly give themselves up for dead from exhaustion and hypothermia – but then they stumble upon an odd cabin in the middle of nowhere, inhabited by one exceedingly strange old man. The soldiers approach the cabin, which looks inviting with a cheery flickering fire — and let’s just say that’s when things get fantastically weird!

There’s much to admire about The Observer: Vivid, believable characters, excellent plotting, and compelling mysteries. The author ingeniously creates confounding situations that make us scratch our head and think (in a good way): “Just what the hell is going on here?” For me, the sign of a truly top-notch piece of science fiction is when I can’t predict what is going to happen next. This book scores well in this regard.

However: As others here have already pointed out, the editing is dicey (to say the least). I appreciate that indie authors cannot afford professional editors, but many of the typos in this book are of the very obvious kind that just about anyone should be able to catch.

But there is a greater deficiency that is more serious. The critical weakness is the ending – at that point when the curtain is pulled aside and we are allowed to have a direct look at why everything that happened to these characters did happen.

In mystery novels, there is often scene at the end where the clever sleuth or detective gathers everyone in a room, explains all the clues and particulars of the case, and then in an astounding crescendo – he names the murderer! All is revealed! Mystery solved!

In a sense, the author takes a similar tact, albeit with a lofty, science fictiony spin of the “Big Reveal” at the end. This tactic might work for some, but it doesn’t work for me. Instead, the author should have “forced” his character to use his own intelligence, his cleverness, and his undaunted, gritty drive to find clues as he overcame obstacles, battled dark forces – and solved the mystery himself – THROUGH HIS ACTIONS!

It’s one of the oldest rules of great writing: Show, don’t tell.

In short: The author should have SHOWED us solution of the mystery through ACTION – rather than sitting us all down in the end for an explanatory lecture. (The main characters literally sit down on a log as they to reveal all to the reader!)

The saving grace of the “Big Reveal” scene is that is has a certain emotional impact because Davison has made us fall in love with his heroic main character, the scrappy Brit, Albert Fox.

Over all, I give this novel high marks because, for the most part, it’s a compelling, entertaining read.

Join Ken Korczak for his adventures in: THE STRANGE UNIVERSE OF DR. 58