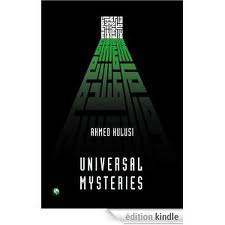 This is a fascinating book which I am going to recommend, but I start out with a warning: This is a translation to English, and the job of translating, although adequate, is far from perfect, and often very clumsy. It reads well enough to be understandable, but some readers may find the dicey English phrases and improper grammar distracting while trying to absorb the challenging concepts presented by the original author. (Note: I understand there may have been an update of the editing recently in a new edition of the book, but I have not viewed that edition, if such exists).

Despite this flaw, UNIVERSAL MYSTERIES is a book I hope a lot of people will read. This is exactly the kind of “expanded” perspective on the nature of religion and God concept that millions of people would do well to consider.

AHMED HULUSI is described as an “Islamic Intellectual” in his bio. Born in Istanbul in 1945, he has worked most of his life as a journalist, but has spent many years in the study of Islam and religion, and delving deeply into the mystical element of Islam, Sufism.

Certainly, there isn’t anything in this book that has not been revealed or proposed elsewhere — by other philosophers, Zen masters, Christian monks, New Agers, even secular scientists — but it’s extremely helpful to get yet another take on how to think of, or envision the Universe as one giant “Intelligence Singularity” (my term, not the author’s) that, at its most fundamental level, is the base of all reality, and is something that can never be divided from the “oneness” of itself.

I felt I got a fresh look at a subject I have been long familiar with — I only wish I could recommend this book more strongly, but native speakers of English will be in for an unpleasant surprise if they are not made aware of the awkwardness of the translation. (Although it may have been updated in a new edition).