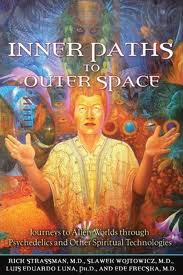 Readers who are already familiar with the work of RICK STRASSMAN, MD, might be disappointed in this book because they will probably find a lot of material they had already read before concerning his studies involving the powerfully hallucinogenic synthetic compound, DMT.

However, anyone confronting this kind of information for the first time should find this book nothing less than astounding. Strassman is one of the few clinical researchers ever to receive permission to study DMT on human subjects, which he did in the early to mid-1990s. What’s interesting are the experiences reported by his subjects — whom were “ordinary people” and volunteers. Under the influence of DMT, they seemed to enter other worlds or alternate dimensions of reality, where they confronted bizarre “alien beings” including elf-like creatures, repitilian humanoids, UFO-type aliens and more. And that’s just for starters.

For those who are already familiar with Strassman’s findings, it’s important to point out that this book also includes considerable contributions from other researchers in this or similar fields, including Slawek Wojtowicz, M.D., Ede Frecksa, M.D. and Luis Eduardo Luna, Ph.D.

I was familiar with the work of Strassman, and I did find some of his material here “nothing new” for the most part; however, the essays of the other writers, especially Frecksa, was for me a new look at the nature of consciousness, and especially the possible quantum structure of the brain on the nano-scale. Extremely interesting.

For people who have never before heard about or read about the deeper implications of hallucinogenic compounds, synthetic or natural, on the nature of reality and consciousness, this book will be nothing less than an amazing revelation.

Most of the material has a high scientific and academic standard, though it sometimes does get a little “New Agey” here and there — but that’s okay. All in all, a fascinating collection of the writings of distinguished researchers which I am happy to recommend.