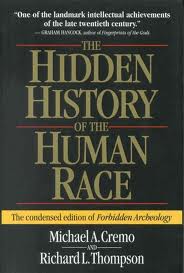 A central theme of this book is bias, in this case, the deeply entrenched biases of the mainstream scientific community. So let me put my own bias on the table right away: To me, the word “creationism” is a dirty word and “Christian creationism” makes me gag.

It doesn’t help that the authors, Michael Cremo and Richard Thompson are “Vedic creationists.” Rather than using a Biblical perspective the challenge the prevailing scientific view on the evolution of humans, the authors proclaim to be adherents of “Lord Krishna” and subscribe to the Vedic view that modern human beings have inhabited planet earth not for some 100,000 years, but millions or even billions of years.

But putting this aside, and keeping an open mind, there is much to like and ponder in the information presented by this book, and the way it is presented – for the most part.

“The Hidden History of the Human Race” does not read like another sensational `ancient astronaut’ screed ala Erich Von Daniken. It’s more like an almost too sober text book. These guys are at least attempting a genuine, reasoned argument to debunk those who are usually the debunkers. Cremo and Thompson have scoured the academic records of paleontologists going back about 200 years, and they attempt to show just how incredibly imperfect, biased and downright delusional the work of “real” scientists can be

And they do a credible job of presenting a convincing portrait of stumbling, bumbling bone diggers, hungry for fame and peer prestige, making whopping assumptions, altering evidence, cherry-picking data, ignoring glaring evidence that does not support their own “religion” of evolution – and much more.

I’m not with those who criticize Cremo and Thompson on the basis of not being degreed paleontologists or archaeologists, which they are not – or even that everything in this book as been “thoroughly debunked.” I’m not so sure about that. The authors put forward troubling evidence showing that the modern scientific view of evolution has problems, sometimes propped up by shaky and or even nonexistent evidence.

On the other hand, the authors are clearly, at times, if not biased in their own approach, are not presenting all the evidence they could in a balanced way. A prime example is their offering of the Klerpsdorf spheres found in South Africa in a strata known to be at least 2 billion years old. Cremo and Thompson suggest these objects are of intelligent design (meaning humans made them) – yet the alternate view of scientists on Klerpsdorf objects is well-known. A convincing and thorough case has been made that the objects are natural formations of nature, not man made.

The point is, if Cremo and Thompson were willing to foist off Klerpsdorf spheres onto their readers as part of their evidence – and did not feel the need to include an additional page to give the obvious alternate view of what they are – then this suggests they are self deluded (at least in this one example) or are deliberately deluding their readers.

Still, mainstream scientists are guilty of the same practices all the time in their quest for fame, research grants, promotions and prestige. So the bottom line for me is: This is a book well worth reading, the authors make some strong cases on enough points of evidence to make this book worthy of serious consideration, and not to be simply scoffed at by “skeptics” who cannnot or are unwilling to think outside the box.

2 thoughts on “Mainstream Evolutionists Are Wrong Say These “Vedic Creationists””