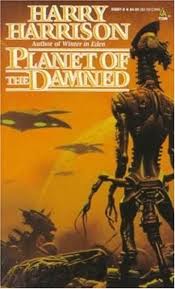 The prolific SF writer Gordon Dickson was called the “Book Doctor” because he was so good at advising other writers on how to make their books riveting page turners. His advice was that a great SF book should have the sound of a metaphoric ticking bomb that could go off at any time, and that the reader should start hearing that ticking on the first page.

In HARRY HARRISON’S pulp offering “Planet of the Damned” the bombs are not metaphors, but literally part of the plot — in this case, a cache of nuclear cobalt bombs in the hands of a planet occupied by the worst kind of violent, savage “cave men” you can imagine. How did such a bunch of primitive grunts get their hands on nuclear weapons, and how do they have the ability to drop them on the neighboring planet in their solar system? Well, like all clever SF writers — and Harrison is among the most clever — he finds a way to make this scenario at least plausible

The savages on the planet Dis want to drop their bombs on the planet Nyjord, populated by a gentle race of passivist philosophers. Only one man stands in the way of this nefarious plot — the incredible Brion Brandd — a super Olympian-style athlete — who finds himself an unlikely draftee to lead the effort to avert the nuclear annihilation of Nyjord. Brandd is not just a jock — he’s incredibly smart, and an empath to boot.

Anyone judging this short novel today must do so keeping in mind that it does not pretend to be anything which it is not — it’s a classic pulp fiction offering, first appearing in Analog SF magazine in 1962. Fast books with a hot premise like this were the bread and butter of pulp-era writers such as Harrison, and he was among the best in delivering genre fiction of this sort, and doing a credible job.

So it’s not great literature, it may not even be stellar science fiction, but it is what it is: A fast-paced, intelligent thrill-novel set in the far future and outer space. Harrison knows his science well, and gives the reader a lesson in exobiology that is interesting and educating, without stalling the plot. That’s no easy task!