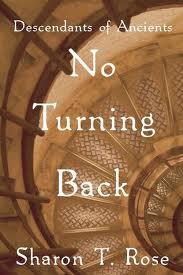 After I read the prologue to this science fiction novel by SHARON T. ROSE, I was sufficiently impressed by the writing skill of the author to want to continue reading, and the first chapter did not disappoint either. I was treated to skillfully handled action scenes, enough strangeness to make me want to know more, and interesting characters – in short, this promised to be an above-average science fiction yarn. And for the most part it is, but perhaps only for a younger audience.

The story involves a titanic interplanetary war that has been raging for centuries. The good guys and the bad guys have basically reached a stalemate. Since neither side can defeat the other, what we are left with is a low-grade state of war that flares up occasionally, or settles back into cold-war tension. The central heroes are the “Descendants” who are seemingly ordinary people, but who have the ability to transform themselves into giant “suited” warriors with extraordinary powers and weaponry. They are fighting an ancient evil enemy called the Sukkers.

To be honest, the “Descendants” remind me a lot of the “Power Rangers” of kid television fame. The similarities are many. Both are young people who say or think of some kind of “magic word” which causes them to transform into powerful, suited fighting warriors. One might also compare the Descendants to a half a dozen other super hero groups, such as the X-Men who, again, are seemingly ordinary people but who have extraordinary powers, and who wear “suits” when they fight bad guys. So on this score, the author does not get high points for originality.

My view is that “No Turning Back” will appeal to a younger audience than a guy like me. I’m a jaded 52-year-old crank who has been reading science fiction for more than 40 years. I’ve read it all, the good, the bad and the ugly – and so I’m hard to impress. For me, this novel for me was “right in there” – not a ground-breaking work destined to be a classic, but an entertaining enough read for a teenage or young adult audience.

I also expect great things in the future from this writer, who has marvelous skill with words.

This book is a free Kindle downland:CLICK HERE