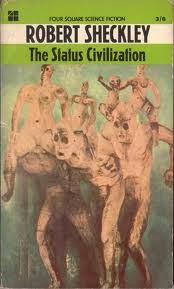 EDITOR’S NOTE: Free eBook gems is part of an ongoing series that reviews great “eBooks you should read” and which are free to anyone to download and enjoy anytime, anywhere.

Science fiction is often called the “literature of ideas” and this short novel exemplifies that concept. The idea in “The Status Civilization” is to strand an innocent man convicted of murder on a prison planet where all is topsy-turvy. The only rule of law is that all must break the law. If you don’t break the law, you get into trouble. Murder is the highest ideal of the citizen. Drug addiction is mandatory. They have a church on this planet, but it worships “Evil”, and yes, attendance is required.

The planet Omega is like a space-age Australia back when the British used that contintent to dump off their criminals and social malcontents. New arrivals are criminals joining fellow criminals who must now form their own society. But in this case, all have their memories erased before being stranded on Omega. They are given only one bit of self-knowledge: The crime they committed on Earth.

The hero is Will Barrent, convicted of murder — a murder he no longer remembers, of course. The problem is, he has the nagging feeling he is innocent, and seems to only want to be good and do good. But now he must try to fit in with an entire planet consisting of and run by other criminals.

It’s a terrific premise, and in the hands of Robert Sheckley, one of the true masters of science fiction, this short novel becomes a marvelously entertaining read. Expect nonstop action, and little in the way of description or anything that does not move along the plot. For example, Sheckley wastes no time with describing scenary or filling out the details of the environment of an alien planet — it’s just bare bones movement of the protagonist doing this, and doing that, as he works his way through his terrible situation.

In my personal pantheon of favorite science fiction gods, Robert Sheckley is among the top three. The primary reason is this: He is a master of a certain kind of cynical, dry and wry irony that is nothing less than hilarious. It’s Sheckley’s extremely unique STYLE that separates him from the run-of-the-mill sf writer.

What really pushes this seemingly pulp yarn over the top to a solid 5-star book is the brilliant way it ends, revealing an unexpected depth of meaning and message. It’s a sizzling commentary on post-modern society that cuts to the bone. Extraordinary.