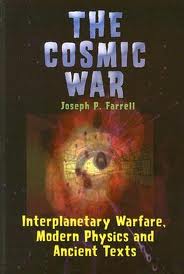 Well! How much fun is The Cosmic War by Dr. Joseph Farrell? A lot! How fatally flawed is the ultimate premise of the book? Let me put it this way — this guy’s theory is on life support. But wait! Let’s not pull the plug just yet!

I’ll be honest. After reading every page, I am almost ready to consider that some kind of cosmic war involving super advanced extraterrestrials took place in our solar system a long, long time ago.

A lot of things in this book made me sit up — such as the picture of the ancient Babylonian god Ninurta wielding a “thunderbolt” that is a dead-solid ringer for a plasma discharge produced in modern labs by physicists. Take that, Carl Sagan!

And there’s also lot of other stuff in Dr. Farrell’s book that’s uber-tough to explain away in terms of mainstream science — but any thorough review would have to be half as long as this lengthy, wordy tome to cover it all, so let me get to where Farrell stumbles so badly, it makes it impossible — beyond a reasonable doubt — for anyone to even so much as consider his total premise to be an accurate one. 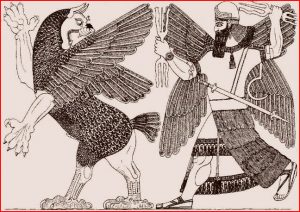 It’s the time frame, my friends. Farrell suggests that two cosmic wars took place, one 65 million years ago, and another 3.2 million years ago. He then asserts that the echoes of this cosmic war are reflected in the ancient texts of the Sumerians, Babylonians, Egyptians, Biblical texts, Vedic tradition and also New World mythology, from the Maya and Aztecs, to the myths of some North American tribes.

But think about it: The oldest texts from the ancient Mideast are perhaps 4,000 to 5,000 years. Vedic texts may go back as far as 5,000 or 6,000 years. And sure, purely oral traditions may push it back a few thousand more years. That’s a long time, certainly– but it’s nothing compared to 3.2 million years, and ridiculous beyond belief to consider a connection between a 6,000-year-old text with events that happened 65 million years ago! 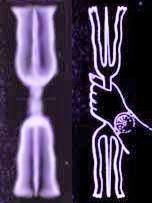 There is just no chance — none — that there could be an unbroken continuity of human story tradition over those millions of years. Think about all of the civilizations, high and low, that have come and gone in just the past few thousand years. The Egyptians, the Mongols, the various Chinese dynasties, the Roman Empire, the Inca, the Aztecs. The Soviet Union lasted only 75 years! Yes, traces of traditions and mythology have survived thousands of years — but again, that’s nothing!

My friends, a million years is a long, long, long time, and 3.2 million years is even longer, and 65 million years only has meaning in terms of astronomical and geological reckoning. To say that oral or written mythologies could have survived in any coherent form 3.2 million years, passed down from one human generation to another with never a break in the chain is, quite simply, impossible by any conceivable standard whatsoever. Period.

The ancient mythologies of Mesopotamia, Egypt, India or any other high civilization simply could not be a record — even metaphorical or allegorical renderings — of events 3.2 million years ago! Accept it, people! It’s impossible! (I won’t even address the egregious problem of the age of the human species itself, alternative archaeology authors such as Michael Cremo and Richard Thompson not withstanding).

What’s tragic is that (and I can’t believe I’m saying this) Farrell may be onto something in this book. But what the author needs to do is jettison the dubious fringe theories of the (admittedly brilliant) astronomer Tom Van Flandern who posits the explosion of two former planets in our solar system 65 million and 3.2 million years ago — and find some way to frame his cosmic war scenario in a time frame of perhaps 10,000 to 15,000 years ago.

If Farrell would only do this, so much about his overall theory would start to make a lot more sense and fall into place– as outrageously astounding as it already is.

Despite all, I am easily comfortable granting this book a high rating, if nothing else, for the pure entertainment value delivered by Farrell’s wild and audacious ideas, and the obvious zeal in which he lays out his thesis. Hey, brother, you don’t have to believe to be intrigued! At the very least, this is like reading an exciting science fiction scenario with an added edge that it may contain the seed of real world plausibility — the teeny-tiny possibility that, by gum it, there really may have been a cosmic war fought by super-advanced aliens in our solar system a long time ago in a galaxy not so far, far away — in fact, the Milky Way galaxy we call our home.
Tweet
Tweet to @KenKorczak
Ken Korczak is the author of: MINNESOTA PARANORMALA

One thought on “Just Cosmic and Crazy Enough to be Possibly True … But Then Again ….”