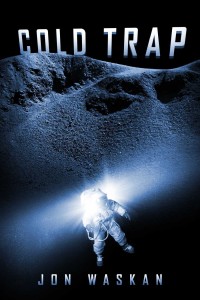 Among the most difficult feats in literature is to write hard science fiction that is also exciting and entertaining. I’m delighted to report that author JON WASKAN has pulled off that difficult deed here with his first novel. This is not only terrific sci-fi, but weaved within this tale of an international moon base is a murder mystery — it’s a who-done-it that will keep you guessing ‘till the end.

Best of all, COLD TRAP is driven by interesting characters who are vividly created and brought to life by fleshing out their life circumstances. When an author creates characters that we genuinely care about and then embroils them in a murderous plot against a background of high-stakes space exploration, well — what’s not to love?

But Cold Trap scores even more points by developing some intriguing subplots. One such situation involves the motivations of the major players pulling the power-political-money strings on a cutting-edge kind of mining operation on the moon.

Rather than giving us a simplistic supply-and-demand scenario featuring powerful nations scrambling to be the first to exploit rare metals embedded in moon ice, Waskan hatches a well-thought-out computer-model-game-theory situation to drive the motivation of the key players in his drama. They are desperate to prevent what they foresee as the disintegration of the world economy/culture into a dismal, chaotic dystopia.

If computer models and social engineering sounds like it might be dull — just the opposite is true in the hands of an inspired writer. Waskan finds a way to build a complex background rationale fueling an urgent impetus for the major players in his drama. Because the reader knows how high the stakes are, the tension of the narrative is all the more visceral and enjoyable.

BAnother subplot which adds juicy science fiction flavor involves mysterious alien life forms — I won’t tell you where they are from because I don’t want to issue a spoiler alert.

So I came away from Cold Trap feeling like I had just enjoyed a meaty full-course science fiction meal complemented by a selection of fine wines followed by a rich desert, an aromatic after-dinner coffee, and even a mint to refresh the pallet at the end.

Is this a perfect book, or perhaps a SF masterpiece? Not quite. The author made a couple decisions that are baffling and which detract from an otherwise satisfying read. For example, it’s inexplicable that so many pages are spent fleshing out the background of the “Moochy” character only to let this character then spend the rest of the novel largely in the background, or as “supporting cast,” as best. (Moochy’s story is compelling, however).

The opening chapter focusing on “The Cube,” a new kind of super computer, is almost entirely incongruent with the rest of novel. There is also a lot of jumping around back and forth in time in the first half of the book, and this is perhaps not so skillfully handled.

However, these latter quibbles may be little more than the picayune ravings of a snobbish literary wonk, and others may not notice anything amiss — I eagerly recommend without reservation this book to anyone looking for a mind-expanding, thought-provoking, fun and ultimately satisfying top tier science fiction read.