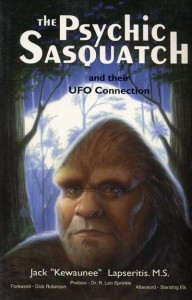 If you ask me, it’s long past due that we all reevaluated everything we think we know about Bigfoot. Why not reconsider the whole confounding Sasquatch enigma from an all new paradigm and perspective?

Well, this book, The Psychic Sasquatch, is a good place to start.

Long-time anthropologist and Bigfoot researcher Jack “Kewaunee” Lasperitis says mainstream science has it all backwards. He says Bigfoot is not an animal, but a unique race of “people” who are far more intelligent than we are. If you think that’s a bold (our audacious) statement, just keep reading. Lapseritis has plenty more in store for you.

Based on his 40-plus years of research, Lapseritis has concluded:

* Bigfoot is an interdimensional entity that can pop in an out of our reality or dimension at will.

* The Bigfoot race of people were seeded here by a vastly ancient and superior race of ETs he calls the Starpeople.

* Bigfoot has powerful psychic abilities, can read our minds and send us telepathic messages when it wants to.

* Bigfoot is an expert astral traveler, extremely kind and loving, and blissfully in sync with Mother Nature.

* Bigfoot has been coming and going from planet earth, ferried by UFOs, for millions of years, and they consider us plodding homo sapiens to be the “missing links,” not themselves.

Lapseritis says the proof of all his is not only his own direct psychic communications with Bigfoot, but that of at least 76 other witnesses and “experiencers” who have wholly independently reported much of the same phenomenon and information. He and 76 other people can’t all be having the same delusion, he says.

Interestingly, Native American lore would appear to largely support all of the above. It’s in the historic record of known American Indian tradition. The indigenous people of the America’s have long been proclaiming for thousands of years what Lapseritis says now about the true nature of their Sasquatch. 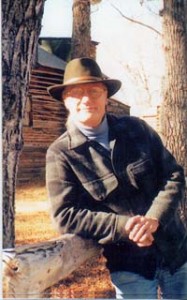 What do we make of it? Well, adopting a radical new paradigm is always difficult. Just think of how impossible it one seemed to believe that the earth was not flat, but round, and that the earth revolved around the sun, and not vice versa. Just stating this publicly could get you burned at the stake or imprisoned by authorities 500 years ago.

No doubt, many will symbolically do just that to Kewaunee Lapseritis in today’s court of public opinion. Caustic skeptics will have a field day gleefully heaping scorn on Lapseritis. They will laugh with derisive contempt upon his airy-fairy, New Agey, spacey theories, which they will say, are not only completely unscientific, but beyond any chance of future scientific verification.

But here’s the thing about Kewaunee Lapseritis — when you read his words, or even watch his interviews on YouTube — one can quickly conclude he is a normal guy. He’s obviously completely sane. He’s not a raving lunatic. He speaks in passionate, determined, yet tempered tones. He’s calm, kind and attentive to those asking questions.

He doesn’t fit the bill of a freaky charlatan who is out to make a buck spewing kaka for the gullible. He reminds me more of my Uncle Stanley, who was a farmer, or Steve, a burly guy who repairs my car in my small town.

Furthermore, Lapseritis comes off as even more sane than many other people — in that he expresses his frustration with the direction human civilization has taken — a path that is almost certainly leading to large scale environmental collapse of the earth’s ecosystem.

“Bigfoot is not the animal, we are,” Lapseritis says.

The proof of that is dozens of wars raging around the planet — people killing each other in city streets and shooting children in schools. We have polluted, over-fished oceans that are dying; large-scale destruction of forested lands is ongoing as is rampant greed for money and material possessions that we don’t need. Petro-chemical agriculture is infecting the soils with synthetic poisons, children are spending hours a day playing “cop-killing” video games as arsenals of nuclear weapons hide in dark silos, ever primed to unleash Armageddon across the globe at the whim of some paranoid government leader.

Lapseritis says the Bigfoot people are saddened and appalled by what the human animal is doing to the beautiful green home that belongs to all creatures of the earth — of the human variety — but also the,animal variety and transhuman.

Think about that before you dismiss his theories about the true nature of Bigfoot.