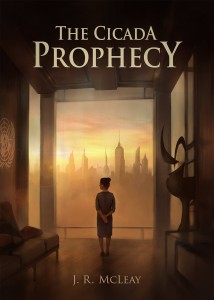 This book, THE CICADA PROPHECY does all of that.

It’s not only a top-notch SF read, but it has a unique enough flavor and style that proves, once again, hard science fiction can still be made fresh while working within the confines of genre fiction.

The science at the center of this yarn is the biology of aging, sex and reproduction, and mankind’s eternal quest to cheat death by tampering with the rules of Mother Nature.

We are up against billions of years of biological evolution — and the question is, can our super science grapple with what nature has decreed? Can we boldly change the rule-set of the ancient game? Can we really make our biological bodies live forever? Can we cheat death? And if we do, will there be some kind of trade-off? Will there be a terrible price to pay for upending the “natural order of things?”

This premise is by far nothing new in science fiction, but author J.R. McLEAY pumps new life into into the situation by creating a world where the majority of the human population has opted to remain frozen in pre-adolescence.

But they have the minds of adults because they are many decades old!

In The Cicada Prophecy, yet another science fictional Brave New World-like scenario — (or Frankenstein, or Heinlein’s Methuselah’s Children or Cordwainer Smith’s Instrumentality of Mankind) — the hubris of humanity is at it again.

This time meddlesome scientists have arrested the aging process by preventing sexual maturation, and they do that by clipping the pituitary gland in the brain. They replace the hormones once regulated by the pituitary with a skin patch that delivers the cocktail of hormones the body needs to stay a healthy adolescent.

The viewpoint character is the brilliant Dr. Richard Ross. Let me tell you — a more suave, charming, brave, kind and intelligent character has not bestrided the stage of science fiction for some time. What’s terrific is that Dr. Ross is both charismatic and likable while sustaining the demeanor of a coldly logical Mr. Spock.

It’s a tribute to this author’s considerable skill in that he created a character that is a walking wonk, a bio-medical technocrat who can spew forth incredible knowledge on everything from genetics to cell biology to botany, but who also wins us over with an ever-present warmth that is understated, yet his tender, graceful demeanor is felt by the reader.

The delightful Dr. Ross can even make a visit to a dreary graveyard seem like a grand celebration of the fame and folly of mankind marching across history!

However, Dr. Ross is balanced with an antagonist which, I must admit, is a tad too cookie cutter for me — the demented fundamentalist, hell-and-brimstone preacher Calvin James — who rails that the arrogance of science will bring on the certain retribution of God — in the case, the fire-breathing, vengeful Judeo-Christian God of the Old Testament.

The Calvin James character does the minimum needed to set up the ultimate central conflict needed for tension in the narrative, but the way the character is handled is, in my view, a missed opportunity to bring more depth to the overall theme of the book. The raving preacher is too simplistic — but again, I’ll just leave it there because I don’t think this does enough damage to tarnish the overall luster of the novel.

(Note: I could also take issue with some of the way Darwin is oversimplified with too much emphasis on the “survival of the fittest” subset element of his work, and the way the author rattles around inside the box of an age-old dilemma — the vexing issue of cause-and-effect that continues to haunt the eschatology of material science today — but again, I’ll beg off on that too).

All in all: No worries! This is a marvelously entertaining work of science fiction that one can kick back and enjoy while rooting for the heroes, hissing at the villains … and if a bit of education on cutting edge biology happens to seep osmosis-like into your brain along the way, well, all the better.

The Cicada Prophecy gets my top recommendation.