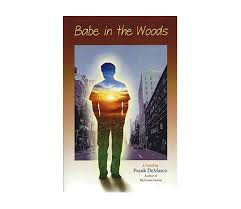 I experienced a minor synchronistic “mind blast” while reading this book.

Sometimes an author’s style will remind me of another writer, but I can’t put my finger on it right away. In this case, it had been nagging at me for some 250 pages, like a steady itch. Then suddenly on page 255 it crashed into my mind: CLIFFORD SIMAK! That’s it! Ahhh! The itch was scratched!

But now the “mind blast”: I finished reading page 255 and at the bottom of page 256, lo and behold, I find this sentence:

“I thought, unexpectedly, of Clifford Simak. Years ago, when I was a kid, I read one of his science fiction stories …”

I don’t mean to make too much of it, but it was just one of those tiny “That was a neat feeling!” moments of synchronicity when you get buffeted unexpectedly by a wave on the ocean of Universal Consciousness.

Anyway – after 250 pages of  BABE IN THE WOODS  – I think anyone would become more in tune to transcendent wavelengths. This book not only gives you an idea of what it is like to tap into expanded consciousness, but dishes out insight after insight – it actually makes you feel what it might be like to push yourself to the edge of higher consciousness – a rare literary feat.

It tells the story of an ordinary group of people from widely divergent walks of life and professions who come together to challenge themselves – to open up their minds, to reach for new concepts, to expand what it means to be an “ordinary” human being in our dreary world calcified by scientific-materialism.

The model for the situation is a real-life program offered by THE MONROE INSTITUTE of Faber, Virginia. The Monroe Institute is an organization founded by the late ROBERT MONROE who became famous after publishing his first book about his experiences with out-of-body travel.

“Journeys Out of Body” came out in 1971. It was an unlikely bestseller, and was followed up with two more books, “Far Journeys,” and “Ultimate Journey.”

Perhaps no other books on astral travel have been more influential. Part of the reason is that Robert Monroe had never been a mystic or associated with any of the established traditions (such as Theosophy, for example, or Eastern religions) which trucked in arcane dabblings like “soul travel” (which also had scary occult overtones for many mainstream folks).

Monroe was no-nonsense, successful businessman who had made a considerable fortune in the burgeoning 1940s-50s world of radio. He was an entirely grounded, nuts-and-bolts kind of guy. However, in the late 1950s, he began to undergo unwanted spontaneous out-of-body experiences. This prompted the pragmatic Monroe to launch into an intense study of what was happening to him.

The eventual result was the establishment of the Monroe Institute. Its original purpose was to study the OBE and all of the mind-boggling implications which fall out of the possibility that our physical bodies are not “all that there is,” and indeed, that what we perceive as physical-material reality is not nearly all there is to consider.

The Monroe Institute developed a number of methods, mostly centered on sound technology that was designed to help any person achieve a state of higher or altered consciousness. These sound technologies leveraged something called binaural beats – and I won’t go into detail here about them, except to say that it was demonstrated that when people listened to binaural beats through headphones while in a highly relaxed state and in a supportive environment, the result could be an out-of-body experience, or some kind of realization of transcendent thought – in short, an expansion of the mind.

So this book, Babe In The Woods, takes us through a group of people who have decided to put themselves through the paces of a Monroe Institute program – except here it is thinly fictionalized as the “Merriman Institute.” Robert Monroe himself is fictionalized as “C.T” and his famous book, Journeys Out of Body is renamed “Extraordinary Potential.”

This is an incredibly ambitious book because it necessarily must employ a large group of characters – some two dozen people involved in the program – whom the author is tasked with not only introducing us to, but must rely on the reader’s patience as he builds them into believable characters of some depth, enough so that we can care about them and learn from them later.

The viewpoint character is modeled on the author himself — DeMarco is a veteran of several Monroe Institute programs.

DeMarco’s fictional incarnation is Angelo Chiari, a reporter with the Philadelphia Inquirer. The premise is that his editor sends him to the Merriman Institute to do some stealthy investigative journalism – and hopefully come out with an expose that might blow the lid off the weird snake oil the Institute is most likely selling to gullible people with enough money and desperation to seek answers to life anywhere.

But these journalist are professionals – both editor and reporter are not out to do a pre-determined hack job. Rather, they intend to get the story in a fair and objective manner. They’ll go where the facts lead them. If reporter Angel Chiari finds a legitimate program – he’ll write about that. If not, it’s blast away with both journalistic barrels. He very much expects it to be the latter, however.

The Chiari character is a classic example of what Henry Thoreau meant when he said: “Most men lead lives of quiet desperation and go to the grave with the song still in them.”

Chiari’s career is okay, but on cruise control. His work has long since become bland and meaningless. The heat of his decades-long marriage has cooled to a husband and wife more akin to roommates. His relationship with his children is shallow and distant.

Chiari holds no particular cherished beliefs. He’s a rational-materialist cog in the post-modern machine. He gets up every day and goes through the motions, running out the time clock on his life. His existence is like a tasteless block of tofu.

Perhaps it’s his training as a journalist that saves him – his fundamental dedication to objectivity leaves the door open just enough for Chiari to approach the Merriman program with an open mind and reserved judgment. That small crack in that door is enough for the Larger Consciousness System (to borrow a term from physicist Tom Campbell) to send Chiari tantalizing, subtle clues to convince him that, by golly, there might be something more to his existence – something remarkable..

This is the fourth Frank DeMarco book I have read. His writing style puts me in the mind of not only Simak, but also Sinclair Lewis (winner of the Noble Prize for Literature). That’s because there is a certain workmanlike doggedness to the way DeMarco hammers out his themes, and the way he develops and cobbles together his messages.

DeMarco somehow leverages the necessarily mundane and uses it to fetch glimpses of the transcendent. He is like a grounded, unspectacular Prometheus stealing fire from the gods, but bringing it back to us with the stolid work ethic of a UPS delivery truck driver.

Because of that, the insights we gain ultimately feel deeper and more authentic. DeMarco’s works are characterized by a  persistent and worrisome expression of doubt – the uncertainty of a person who knows he is threading a fine line between making sense of highly original and novel forms of information — while ever cognizant of the innate capacity of the human mind to fool itself with egoic delusions and struggles with Freudian “wish fulfillment.”

I’m guessing that Babe In the Woods, published in 2008, has since found only a small audience, but I can imagine it developing an ardent cult following – much in the same way that A VOYAGE TO ARCTURUS by Scottish writer DAVID LINDSAY has persisted and moved people since it was published in 1920.

You might be wondering how I can compare the syrupy surrealism of Lindsay’s ‘Voyage’ with DeMarco’s more staid ‘Babe,’ but I would challenge the reader to read both — tell me if you don’t see that, in a weird way, both works have the same heart.

Clifford Simak, Sinclair Lewis, David Lindsay — Frank DeMarco stands with guys like these in the literary world – and that’s not a bad place to stand, indeed.

One thought on “‘Babe In The Woods’ by Frank DeMarco: Destined to be a cult classic on par with David Lindsay’s ‘Voyage to Arcturus’”