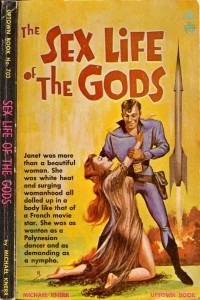 In the 1950s and early 1960s there was a certain market for “smutty” science fiction novels. They were often issued by small shady publishers who worked out of a crummy one-room apartment or maybe some seedy rented office. They paid $250 to $500 for 50,000 words. The thin paperbacks sold for 50 cents.

Sure, $500 was decent money back in the ‘50s, but it still wasn’t exactly lifestyles of the rich and famous. But one good thing about it for writers was that it was a way to break into the business, and hopefully move on and up to better things.

One such writer in this game was Michael E. Knerr. He was from a small town in Pennsylvania and he very badly wanted to carve out his place in literature, maybe science fiction, or writing historical books and westerns. He was a close friend of the more famous H. Beam Piper, also of Pennsylvania. Piper was one of those guys who clawed his way out of the science fiction gutter to gain considerable respect in that field – until his career cooled off and he put a bullet in his own head. He was Knerr’s role model.

This offering, THE SEX LIFE OF THE GODS by Knerr is a classic example of what, in effect, was the Internet content mill of the day – cheap novels designed to be written fast and published with salacious titles and lurid covers. They promised steamy sex mixed with thrilling space opera. They were distributed to book stands in drugs stores and vanished from the shelves three months later, never to be seen again.

The market for such fare was most likely young male loners – you know — teenage boys, perhaps, or early 20s men who were not exactly slick with the women – the kind of guys who probably read a lot of comic books, glued together model airplanes and, well, I’ll say no more.

But they could live vicariously thought these novels thrilling to the escapades of flinty-eyed, square-jawed heroes who could make beautiful women squirm with sexual desire just by walking into the room. The space jockey was fast with a ray gun, could expertly pilot a starship, do sword battle with bug-eyed aliens – they were Han Solo, Buck Rogers and Captain America all rolled up into one.

Knerr and others like him wrote these books at lightning speed. They were strictly “one-time through the typewriter only jobs” and then rushed off to the publisher. The next challenge was getting paid. Writer’s like Knerr were sometimes cheated out of pay, or often had to settle for half the $500 originally promised. They worked with no written contracts – just verbal agreements and maybe (maybe) a handshake. The latter is unlikely because the relationship between writer and fly-by-night publisher was usually dicey and unfriendly, to say the least.

Some aspects of Knerr’s life as a hack writer may sound care-free and romantic – those who knew him said he could live on one $500 or $600 payday for months. He lived on a sailboat in California while gaining traction as a popular writer – but sometimes he starved, and I mean literally. He once subsisted on a few cans of cranberries and dry crackers for days.

Knerr eventually had to opt out of the freelance novelist game to work as a small-town newspaper reporter back in Pennsylvania, but he never gave up writing. Reports vary on how many books he actually published – some say six or seven, others say as many as 20. He may have published under several pen names, and he apparently eventually gained some momentum as a writer of western novels.

Sex Life of the Gods, for me, was an enjoyable read in the extreme because of the campy fun effect – you know, like watching an egregiously bad science fiction movie, such as PLAN 9 FROM OUTER SPACE. Knerr said guys like him “stole their plots right out of TV Guide.” Ha, ha! That’s for sure. Sex Life of the Gods is just so cookie cutter in terms of plot and character, it’s almost like he used a flow chart – “Name hero – give him x problem – have him meet/fall in love with sizzling dame – make him on the run from (insert cops, CIA, military, aliens) – enter chase scene here — has sex here …” and so forth.

I suggest you download this free gem immediately and have an incredibly great laugh and some pure camp fun– but at the same time – reserve some respect for a bona fide hacky pulp fiction artist who was actually much more than that – by all accounts. Michael E. Knerr developed some serious literary talent and published some quality books before he died in 1999 at age 64.

NOTE: This is a free download at Project Gutenberg which you can find HERE.

One thought on “Free ebook “The Sex Life of the Gods” by Michael E. Knerr is a super campy, hilarious science fiction read from the early 1960s”