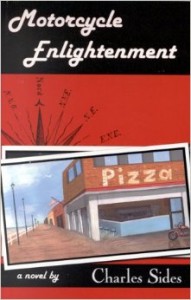 I think it’s fair to say that the title of this novel, MOTORCYCLE ENLIGHTENMENT, will immediately invoke for many readers that great icon of American literature, ZEN AND THE ART OF MOTORCYCLE MAINTENANCE, by Minnesota native and genius Robert Pirsig.

Motorcycle Enlightenment is more light-hearted fare, though I hasten to add, this in no way detracts from what is a fine, often even elegant novel penned by CHARLES SIDES.

This book tilts more toward Richard Bach’s ILLUSIONS in terms of reading challenge as compared to Pirsig’s epic work of brilliance. And yet, there is a central element within Sides’ book that has a tantalizing confluence with Pirsig’s book. It’s this:

Pirsig proposed that there were essentially two kinds of people: Those who model their world in terms of gestalts, as in “Zen mind” or people living “in the moment.” These people are just “flowing” with events. The others are detail oriented, focus on inner workings and rational analysis of what they see right in front of them. They confront life one task, one thought at a time. Their world is a nuts-and-bolts affair that needs perpetual maintenance.

The hero of Motorcycle Enlightenment, Alan Pierce, journeys from being the nuts-and-bolts type toward being the flowing gestalt type, and perhaps ends up an amalgamation of both, although is journey is not yet complete as the novel ends.

“… if I had a two-forty-five dental appointment and something interrupted my schedule, I would drive 70 miles an hour to be there on time even though I knew the dentist ran late and wouldn’t take me before three … when I have an appointment, I plan my whole day around it and arrive at least 15 minutes early. Sometimes I drive around the block four or five times …”

His near-OCD personality within the straight-jacket of American materialism has led him to the classic midlife crisis typical of the Western man in a postmodern world.

He has had success in business, accumulated some cash, but discovers that after clawing his way up the hill of the American Dream, he find himself empty and riddled with existential angst. His marriage has flamed out, ending in rancorous divorce. He maintains a shallow non-relationship relationship with his two grown children. He has sold off his businesses out of sheer boredom.

But terms like “midlife crisis” and “existential angst” are artifacts of our clueless, psychically-adrift society. What ails Alan Pierce was identified by The Buddha some 2,600 years ago. He called it the “dukkha.” 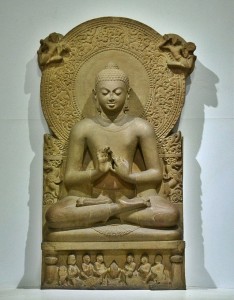 The dukkha is the suffering — the daily, perpetually smoldering and/or raging suffering of ordinary, mundane living.

It’s the agony of the self.

More specifically, it’s the festering pain of the False Self. This is the ego construct which we start assembling from birth until it calcifies into a scab-encrusted exoskeleton surrounding and suffocating our beautiful delicate souls, which long to be free.

The ego tricks us into thinking that IT is who we are, when the fact is, the ego is little more than a mindless robot – a grab-bag-sack collection of deeply ingrained habits poured into a mold of false belief systems, propped up by the intellect, and fueled by fear. The ego has only one goal: To survive at all costs.

But wait – the Zen Master SHUNRYU SUZUKI says something interesting:

“Everyone is enlightened all the time, whether they know it or not.”

And we see can that Alan, despite his desperate state, is already much further along the path than he thinks. That’s because early on we encounter a man who is in a state of constantly watching his own thoughts and observing his own behavior.

A less informed reader might find Alan a tedious schmuck:

Nuts-and-bolts, perhaps, but this seemingly narcissistic self-referencing drivel is not really that, but rather indicates a budding awakening to an awareness that leads to amazing results.

The great Swiss psychologist Carl Jung said that we need to start thinking of thoughts as less like ephemeral things that exist only in our minds than as actual pieces of furniture that are cluttering up our rooms. We constantly bark or shins upon or trip over all this gaudy interior decorating. (Actually, it was his winged spirit guide, PHILEMON, who told him that).

But here’s the thing about thoughts, whatever their true nature: They absolutely hate to be watched. People who start to watch their thoughts will soon discover something amazing: Your thoughts will quickly begin to act like petulant children, and ultimately, they’ll try to hide from your steady gaze. In short, if you watch your thoughts, they’ll go away.

“If my thoughts go away, so will I! I’d be nothing! And I want to be something!”

This is not true at all. Your thoughts are not who you are. They’re akin to any other material tool that we use to hammer, bend and twist things with while we ride around in our meat bodies here in physical matter reality. Thoughts can be picked up and used, but when you’re done, they should be stored away in a handy toolbox. (I like the way ECKART TOLLE puts it: “Too much thinking is like too much drinking – both are bad habits that will make you miserable”). 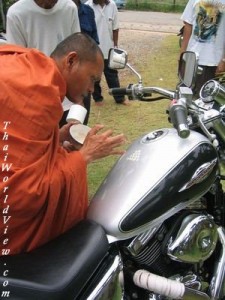 Those who learn to make their thoughts go away find out that something much deeper and profound moves in to support and uplift what you truly are – it is said this “thing” has no name, but in our language-limited existence we struggle to call it “beingness,” “presence,” “suchness,” “pure consciousness,” or whatever.

The fact is, you continue to have existence. You are still in the same world, except everything is not such drag anymore – yes, you’ll even still have thoughts – but now you are being carried along in a kind of blissful natural flow.

You were enlightened all along and you never knew it!

Alan finds his way through yoga, meditation and by stripping his life of the majority of his material possession. Like Ulysses, he finds unexpected help along the way – a lovely real estate agent, and a wonderfully materteral landlord (whom I kept picturing as Aunt Bea from the old Andy Griffith show).

AND NOW A LAST IMPORTANT POINT:

This is a book that you can read on any level you want. It can be a delightful story with a breezy atmosphere that takes you along for pleasant seaside walks, strolls along boardwalks, time-outs for contemplation on park benches  – all with frequent breaks for doughnuts, pizza and naps!

It’s great escapism. Who wouldn’t want to enter the world of a character who doesn’t have to work, has all the cash he needs, and is still handsome enough to attract the adoring attention of pretty real estate agents?

I felt enriched when I got to the last page. I felt rested and uplifted – lighter.

So, all the intellectualizing I inflicted upon you through most of this review is strictly extracurricular blather for wonks like me with who like to bloviate about philosophical clap-trap – but it’s also nice to know there’s enough meat available in these pages for those who likes to read between the lines.

Charles Sides does not beat his reader over the head. He’s a subtle writer who shows us stuff while entertaining. But don’t be surprised if you absorb a deeper message from these pages while joining this guy on a journey of Motorcycle Enlightenment.