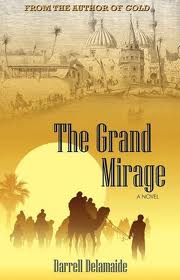 For a hardcore history buff like me, reading fiction based on history is like adding a spoonful of sugar that gives an extra level of enjoyment while I am learning. On the other hand, one must always remember that historical fiction is just that – fiction.

Enjoy is what I did as I read THE GRAND MIRAGE by seasoned journalist DARRELL DELAMAIDE. The novel centers on the machinations of European powers in Turkey and the Middle East in 1910, the beginning of the world’s future tragic obsession with controlling the oil fields of the world.

Year 1910 was also a time when the First World War was smoldering. Germany was determined to bolster its “empire” status on a scale that Britain had managed over the previous 100 years. To that end, the Germans were determined to thrust a railroad through the heart of the Middle East – the famous Baghdad Railway. Unfortunately, the Germans and their Turkish allies considered the railway to be an instrument of military conquest as much as a boon to commerce.

The British were not about to sit back on their hands as Germany engineered this massive power play in the region. Some historians today contend that the Baghdad Railway was the biggest single factor leading to World War I.

And so, in The Grand Mirage, the British Foreign Secretary dispatches the scholarly, but still relatively youthful and handsome Lord Richard Leighton, the 9th Baron Leighton, on a near suicide mission across the deserts of Syria and Mesopotamia. His goal is to gather as much information as he can about German progress on the Baghdad Railroad.

Mind you, Lord Leighton is a fictional creation – he is like a 1910 version of James Bond, but more effete and aristocratic. Leighton teams up with a chummy American, Robert Morrison, a hydro-engineer turned spy and adventurer. Leighton also brings along his personal valet into every dangerous, dusty corner of the Orient. Together, the unlikely trio gather the goods while enduring peril and hardships aplenty in their mission to thwart the Kaiser.

This well-crafted, highly intelligent novel gets my highest recommendation. However, as the U.S. Poet Laureate Randall Jarrell said: “A novel is a long piece of writing that has something wrong with it.”

What Is Happening To All Our Fictional Heroes?

The Grand Mirage bears a common, and disturbing literary weaknesses that seems to be spreading among an increasing number of even today’s best novelists. The weakness is this: The hero of the story rarely does anything to extricate himself from the jams he gets into. Rather, someone else swoops in to save him at the last minute.

For example, read my review of another high quality novel, RED COAT, which also features a gallant British gentleman engaging in adventures across the globe. Like in this novel, whenever the hero is accosted by determined enemies, or confronts serious danger he either:

A. Runs for it

B. Has is fat pulled out of the fire by someone else.

Why is this such a serious problem? Because it takes the punch out of the story. It’s also a lazier form of writing. If the writer gets his or her character into a tough spot – and then forces him to leverage his own intelligence, his own resourcefulness, his strength, and his skills TO SAVE HIMSELF– it makes for a thrilling, satisfying scene that bolsters the overall narrative. The hero should have incredible self-initiative and self-sufficiency in the face of personal danger.

Think about James Bond. He’s cool, he’s enterprising, he’s deviously clever. He’s is also highly skilled in personal combat and bristles with hidden weapons. People, when you mess with 007, you do so at your own peril! He can beat a man to death with his bare hands in a bathroom, or turn a can of hairspray into an instant blow torch to fry an attacking cobra!

But Lord Richard Leighton? He relies on his scrappy American buddy, his valet – and yes, even his girlfriend – to take care of the bad guys for him. There is only a single scene in which Leighton uses a clever ruse to escape his dangerous pursuers – but even then, it is so he can be rescued by the police, not do his own fighting.

So despite this increasingly common flaw – in this novel and many others today – this is an enjoyable and well-written piece of historical fiction, and gets my top recommendation.