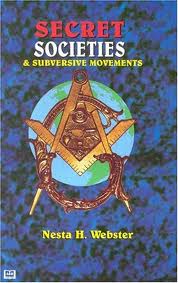 After about 50 pages into Nesta Webster’s Secret Societies and Subversive Movements, I felt like saying, “Oy vey, what a deplorable hag!” Mind you, I’m not even Jewish. But you don’t have to be Jewish to be creeped out by the sticky, pseudo-intellectual webs being spun with matronly fervor in this study of arcane organizations and their bizarre agendas.

Webster sees evil Jewish Cabalists hiding behind every corner of history, plotting, planning, infiltrating and sabotaging as they attempt to control governments, destroy kingdoms, form false religions and … and … I guess … doing so from positions of power, yet always in the shadows. These potent, shrouded manipulators emerge every few hundred years to pull strings whenever they feel it is necessary to kick over the swarming goyim anthills that pile up around the globe.

Take the French Revolution, for example. Webster says it was engineered by the Jews and the Masons. Christian Gnosticism was a perversion of true Christianity with precepts of the Cabala, she writes. How about Bolshevik Revolution in 1917? Jews again. World War I? Take a guess.

The most insidious propaganda is factual information interspersed seamlessly with one’s own hidden agenda, in Webster’s case, the exultation of snowy-white version of Christian Fascism. To be sure, Webster was no slouch. She was a real wonk for gritty, painstaking research. She wasn’t lazy, which is what made her so dangerous. Even Winston Churchill praised her work, and she was allowed access to make special presentations to high levels within the British Military.

Webster was an unabashed in her Fascism. She praised Hitler for “halting the Jewish attempt to control the world.”

I doubt many are reading Nesta Webster today. Still, it’s interesting that her work lives on and now infects cyberspace in the form of a free ebook you can download from from sites such as Amazon and, somewhat ironically, from Project Gutenberg, the ebook site named for Johannes Gutenberg, who was most likely a Jew, and famous for printing a Bible.

One thought on “Free eBook: Nesta Webster’s Secret Societies Displays The Mind Of A Fascist’s View Of History”