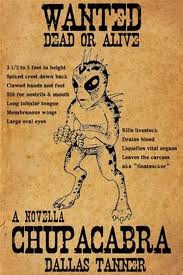 You know the way sometimes you’re flipping channels and you get to the Science Fiction station and notice they’re running some obviously super low-budget made-for-TV movie with some ludicrous premise – and you settle in to enjoy watching an extremely bad movie?

It’s that well-known “it’s-so-bad-it’s-good” phenomenon. A couple of years ago I happened upon a Sci-Fi Channel offering about a guy who turned into a giant mosquito! Ha, ha! Did you see that one? Boy, it was so screamingly dumb! But it’s fun to watch goofy crap like that occasionally because – well, I’ll just leave it to some psychologist to score a government grant to explain to all of us the why-we-like-bad-entertainment phenomenon.

But I mention this because I have just finished reading the short novel, CHUPACABRA, by DALLAS TANNER. I’ll come right out with a theory I have about this offering: I’m thinking that Mr. Tanner may have first attempted to write a script for a made-for-TV B movie, shopped it around, got no bites, and so decided to turn his script into a short novel.

As the title suggests, this is a yarn with the legendary CHUPACABRA– the goatsucker – of mostly Latin American legend, at the center of the premise. Chupacabra is a crypto-zoological beast with vampire-like tendencies that preys on farm animals. It sucks its victim dry of blood – but leaves the meat.

Unfortunately, reading a bad science fiction novel does not deliver the same pleasure as watching a bad movie. I think it’s because you have to work harder – you know, with the reading, and all. When you watch a terrible TV movie, you just sit back with a beer and a bag of Cheetos and let the dreck come to you. When you read a B-novel, there’s all that effort with the squinting at words and turning of pages, and such.

As fiction, Chupacabra makes every conceivable literary mistake a writer can make to ensure that this will be a truly terrible piece of writing – cliché-cardboard characters, blocks of exposition without action, absolutely no original concepts, and supremely poor editing.

Consider: One of the characters is a lovely Caribbean-born scientist who is something of an expert on the Chupacabra. She is alternately identified as: “an astronomer,” “an astrologer,” “an astronomist,” and “a technician.” I take pains to point this out to show you that I am not merely being purposefully mean and snarky in my review, but that I am only applying the unfortunate credit to where the unfortunate credit it due.

You might be surprised that I am going to say now that this author is almost certainly a far, far better writer than this novella suggests. I’ve been making my sole living as a freelance writer and editor for almost 30 years, and one develops an instinct for those who have “got it” and those who never will. Dallas Tanner has what it takes to be a genuinely fine writer, believe me — I can just tell – but no one will be able to tell from reading this book.