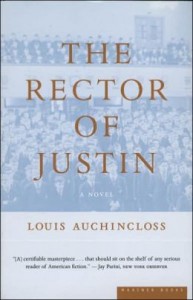 Only four fiction books achieved the No. 1 on the New York Times Best Seller List in 1964. “The Group,” by Mary McCarthy, “The Spy Who Came In From The Cold,” by John le Carré, “Herzog,” by Saul Bellow and this book — “The Rector of Justin,” by Louise Auchincloss.

Auchincloss wrote more than 60 books, and ‘Rector’ was his only to score the exalted status of No. 1 NYT best seller.

It’s a fantastic book and still a marvelous read today. I think it should be on one of those 100 Best Book of the Century lists. I’m somewhat prejudiced because, A) I’ve long been a huge Auchincloss fan, and B) the setting of the book is one of those elite, selective and super-snobby East Coast private prep schools for boys — in this case, inspired by the real Groton School of Massachusetts.

Ever since I read “A Separate Peace” by John Knowles way back in high school, I’ve loved books of the elite-prep-school genre, if it can be considered a genre. Auchincloss himself was an alumni of Groton. He went on to Yale where he earned his law degree and became a highly successful Wall Street lawyer.

In his spare time, Auchincloss cranked out novel after novel, as well as numerous short stories and essays. His books plumbed the lives of American aristocratic elites. The Auchincloss family itself was among this exclusive class; Louis Auchincloss was a distant cousin of President Franklin D. Roosevelt (also a graduate of Groton)

So — The Rector of Justin follows the career of the fictional Rev. Francis Prescott who founded Justin Martyr, a school obviously modeled on Groton. Most people naturally assumed that the Prescott character was inspired by the man who founded Groton, the Rev. Endicott Peabody, who served as it headmaster for an incredible 54 years! 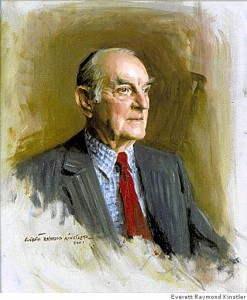 But Auchincloss revealed later in interviews that this was not the case. The real subject for his fictional profile was none other than the U.S. Judge and brilliant legal scholar, Billings Learned Hand. Auchincloss hero-worshiped Judge Hand, and looked up to him as a mentor.

Whatever the case — on the outside you might think this book is as exclusive, stuffy and snotty as its subject matter, but it’s anything but. Auchincloss has a marvelous literary touch; his writing is infused with subtle humor, but more so, gobs of insight into the interior psyche and human motivation.

Some critics considered Auchincloss a bit too “glib” and lacking a certain level of gravitas that would have made him a true literary giant in the ranks of, say, Hemingway, Sinclair Lewis, or Faulkner — but these critics are wrong.

Auchincloss may have been the genuine article — an Old Money, connected, East Coast Elite and brilliant literary talent — but his writing style is that of a man who effortlessly aligned himself with the common rabble. (All of us.)

Auchincloss’ razor-sharp wit and penetrating powers of observation bring the filthy rich down to size. He exposes their moral weaknesses when necessary, and shows how having gobs of cash and connections rarely translates to happiness.

I’m tempted to go off on other tangents about the considerable powers of Louis Auchincloss, (he received the National Medal of Arts in 2005) but I’ll stop here and urge any and all to grab this book and enjoy a highly accessible read. The Rector of Justin is easily among the best of adult fiction books written in the past fifty or sixty years.