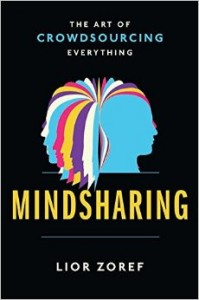 The author of this book is rightfully exuberant about the wonders of the crowdsourcing phenomenon, and his new spin on it, for which he has coined a fresh term: MINDSHARING.

I fully acknowledge the many positive aspects of the revolution he is talking about – the incredible power of the crowdsourcing phenomenon and the new and innovative ways all of us can leverage social media platforms to advance our lives.

For the most part, it’s a terrific book, I recommend you buy it. But what concerns me about the book is author LIOR ZOREF‘s failure to fully acknowledge the dark side of crowdsourcing and what he calls Mindsharing — and have no doubt, there is a dark side.

In any revolution, there are always winners and losers. Let’s just acknowledge that.

For example, take such long-time professionals as journalists, freelance writer, photographers and graphic artists. One of my close associates, who is a talented graphic artist, described the situation this way:

“Imagine if someone needed a plumber. In the “old days,” he would have gone to the Yellow Pages, hired a professional, contracted for the work and the plumber would have been paid for the services he or she rendered.

“But now imagine if a person could instead put out a call to get 20 plumbers to come to his house, fix his leaky pipes, and then only one of them got paid. The rest had to work for free. And the one plumber who did get paid earned 90% less than he previously did. 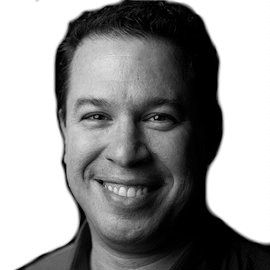 “That’s crowdsourcing – good for the guy who needed the plumber, but bad for all plumbers.”

My friend’s plumber analogy is basically what has happened to tens of thousands of graphic artists, he said.

Today, if someone needs a new logo, there is little need to hire or pay a professional graphic artist to do the work. All you have to do is go to a crowdsourcing site, select from among thousands of logos that have been professionally designed and loaded onto a website.

Because each artists’ logo will be one of thousands, the most he or she can get for his work is many $1 to $10 – but it’s much more likely they will almost never sell a piece of commercial art. The crowd is just too massive. There’s too much competition – and everyone is working for free. Selling something you designed is more akin to playing the lottery.

In fact, this is the way Mr. Zoref arrived at the final the cover design for this book. To his credit, he at least acknowledges the downside. He writes:

“There are some who say that Web sites such as 99designs make designers work without getting paid (unless their design is chosen), while others see it as a disruptive force offering cheap alternative to expensive designers. Without a doubt, it gives designers a chance to develop their portfolio and bid on jobs they might never had access to without the platform.”

But this is a bland statement. It fails to acknowledge that every time a designer puts her work out there for free, she is undercutting herself and everyone in her profession. The fact is, untold thousands of designers are flooding dozens and dozens of online sites like 99designs with unlimited “free stuff” – so why should anyone hire and pay a graphic designer ever again?

There are many other similar examples of the same phenomenon happening across an array of other professions – but I’ll leave off here because I don’t want to drone on for pages — but I wish Mr. Zoref would have paid more attention to the tens of thousands of people who have found lifelong careers become suddenly irrelevant (unless they are willing to work for free as slaves).

There are other aspects of Mindsharing and crowdsourcing that also bring out my “Inner Contrarian” and yes, I’ll admit, my “Latent Luddite.”

I mean, how eagerly do we really want to go down this road? Do we want to start outsourcing every aspect of our lives, minds and personalities – even our personal, intimate love lives?

Mr. Zoref seems to think so – have a problem finding love or with dating? Easy! Mindshare it! If you’re socially inept, don’t worry. Zoref says the hive mind behind your smartphone or tablet will tell you what to do, how to act and how to be. The “hive mind” is ever ready to choose for you who you will date, and even how to speak and act on that date.

You may be a social cripple — but no problem — the ubiquitous Mindsharing hive will carry you along with the rest of the ants.

I’m only getting started here – but it’s far past time to pull the plug. I’ll just leave you with some homework to do. Here’s your assignment:

Go to Google and look up a mysterious figure by the name of Jar’Edo Wens.

When you find out who Jar’Edo Wens, ask yourself: Do we really want to crowdsource encyclopedias, or as Mr. Zoref suggest — crowdsource “everything?”